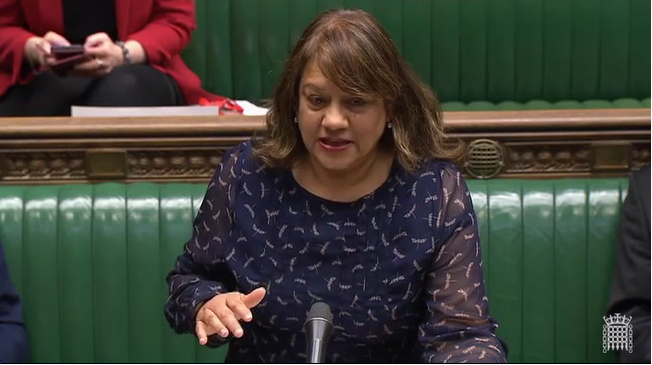 I responded to the Government’s Business Statement on Thursday 13 February, which marked nine weeks since the General Election. You can read my full speech below:

I thank the Leader of the House for the business for the last week of February. I cannot believe time has flown so quickly! It is nine weeks since the last election, and already it seems that the few are abdicating their responsibilities for the many. Nothing has been said about the deaths resulting from smart motorways. The Minister who signed them off, the right hon. Member for Hemel Hempstead (Sir Mike Penning), has called for a halt and accused Highways England of “casually ignoring commitments” on safety systems. At the same time, the bosses at Highways England have received a pay rise, with the number who have salaries over £100,000 rising from six to 63 since 2013. Why is this happening when the staff at the bottom have received a pay rise of 0% or 1%? Who are those bosses accountable to? This is exactly what contributes to the democratic deficit. May we have a statement on why they were able to award themselves that pay rise, and on when smart motorways will end?

It is nine weeks since the last election, and now it has all been revealed: border checks are inevitable. We did not hear that phrase during the Brexit debate. The smart border will apparently not be in place until 2025. The British Retail Consortium says an increase in border checks will affect fresh food supplies unless there is a massive upgrade in border facilities. Importers and exporters are going face huge costs. Could we have a statement on the readiness of smart borders or at least on what they are going to look like?

It has been nine weeks since the last election, and already the Government have run out of files, or did they intend to publish their process and procedure on ​their position on financial negotiations? We now know that the financial sector will get its permanent equivalence for decades, while the fishing industry may be under threat, from Grimsby to Brixham. We know that the EU wants existing reciprocal arrangements to be maintained. Could the Leader say whether the fishing industry is going to be sold down the river—or the ocean—from Grimsby to Brixham?

My right hon. Friend the Member for Tottenham (Mr Lammy) was right when he asked his urgent question and asked for a review. The review will look into the apparent injustices in the deportation process. The Government have to stop these deportations. Hon. Members on both sides have constituents involved. My hon. Friends the Members for Brent Central (Dawn Butler), for Birmingham, Edgbaston (Preet Kaur Gill) and for Birmingham, Ladywood (Shabana Mahmood) all had constituents on the flight concerned. It is right that those people had to be prevented from being deported. The courts have said, “We want due process.” These are British citizens; they deserve fairness, and they need to know their rights. I do not understand what the reason for the secrecy is—this is very simple. Can the Leader of the House guarantee that there will be no further deportations until that review has been published?

One review that has been published is the National Audit Office report into the death by suicide of benefit claimants. It said that an internal review of the cases was not properly implemented. Coroners are sending in reports of avoidable deaths. The Government’s policy is seriously affecting people’s lives. When will we have a statement from a Minister, as asked for by my hon. Friend the Member for Battersea (Marsha De Cordova), on these avoidable deaths?

Nazanin, Anoosheh, Kylie and others do not deserve to be in prison, as the Leader of the House has mentioned so many times. It is half-term for Gabriella. There has been no update from the Prime Minister for the last three weeks.

I want to ask the Leader of the House what it feels like to be replaced by three cartoon characters. It’s classic Dom, as John Crace—one of the journalists banned from a No. 10 briefing—said. We want Pugh, Pugh, Barney McGrew, Cuthbert, Dibble and Grubb. At least there are more of them—and that is classic BBC.