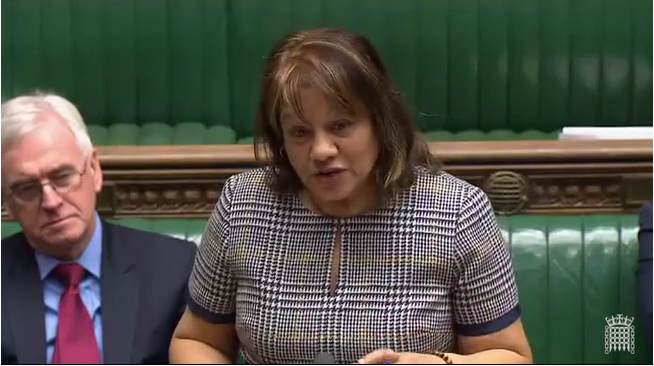 I responded to the Government’s Business Statement on Thursday 27 February, highlighting its inaction on health inequalities, flood defences and zero-hour contracts. You can read my speech below:

I thank the Leader of the House for the forthcoming business. I am pleased to see that the Committee of Selection has now met and that the Select Committees are on the Order Paper. Just to clarify, the situation had nothing to do with the Labour party; it was in fact the Government who were delaying it. I hope that there will be motions on the Order Paper on Monday for the House to approve.

Will the Leader of the House provide the list of ministerial responsibilities? There have been a lot of new appointments.

Will the Leader of the House confirm that any of the new recruits who come into No. 10—particularly in the light of the statement by the right hon. Member for Bromsgrove (Sajid Javid) and the replacement of his staff—who have not been security vetted will not be given security briefings? I understand that someone who was recently removed from No. 10 had not been security vetted. These staff need to go through the proper Cabinet Office procedures.

As Cabinet Office briefing room A, Cabinet Office briefing room B and the Prime Minister’s wellingtons lie unused, the climate emergency is taking its toll on our citizens. They are watching their furniture go down the river. We had a record 632 flood alerts on one day alone. The statement on Monday by the Secretary of State for Environment, Food and Rural Affairs said nothing about repairing flood defences. The Labour Government increased funding by 10% a year, but under the Tories that was cut to 1.2%. The Labour Government in Wales are looking after the distressed folk by giving the affected households £500, and up to £1,000 if they do not have insurance. That is practical help. Will the Leader of the House perhaps ask the Secretary of State for Wales, who is coming to the Chamber later, about the one-off £10 million infrastructure payment that the Government of Wales require? I am sure the Leader of the House will want to provide time for an updated statement after the Prime Minister visits Shrewsbury this weekend.

No debate on the Marmot report is scheduled in Government time. Professor Marmot said that the past decade has seen those in disadvantaged areas face declining health, with life expectancy falling, especially for women. He called the damage to the nation’s health “shocking” and said:

The Leader of House cannot dismiss Professor Marmot because the Prime Minister himself said yesterday that he worked with him.

Why have we not had a debate on the £7 million contract for private US firms so that they can screen what they are calling our most expensive patients? Will the Leader of the House rule out people being denied treatment—or are we getting into questions of the deserving and undeserving? The next step is going to be screening people out; what is the Government’s obsession with screening people out? May we have a debate on that? I hope the Select Committees will be up and running; perhaps they will be able to report to the House.

We have the absurd situation in which the Deputy Health Minister in Iran has covid-19 and British citizens are lying in jail having done nothing. Nazanin, Anousheh and Kylie need to come home. They need proper treatment. An Iranian MP has said that they should be released on compassionate and humanitarian grounds. Perhaps this is a job for the United Nations or the World Health Organisation, or perhaps even for the right hon. Member for Skipton and Ripon (Julian Smith), who did a fantastic ​job on Northern Ireland. Perhaps he can do some negotiating as the Government do not want to do that on behalf of their British citizens.

Will the Leader of the House please clarify a point made by the hon. Member for Central Ayrshire (Dr Whitford)? She asked the Secretary of State for Health and Social Care about those who self-isolate, and urged the Government to make clear that those who do so should not be penalised in terms of their employment rights. The Secretary of State said that only those who self-isolate on medical advice will be protected. We have many people on zero-hours contracts, and they will not be protected. They are self-isolating to protect our citizens. May we have clarification that everyone, whether they get medical advice or not, will be protected and have their employment rights protected? There was a helpful email from the House authorities on covid-19 and on what Members can do. Will the Leader of House please ensure that up-to-date hand gel is available for public areas, such as the Public Gallery, and for those staff who are interfacing with the public, so that they are also safe?

The Speaker’s Chaplain held a service for Ash Wednesday in the Chapel of St Mary Undercroft with Canon Pat Browne. We are pleased to welcome Canon Patricia Hillas, who will be inaugurated next week. Finally, I wish everybody—Welsh or not—a happy St David’s Day on Sunday.