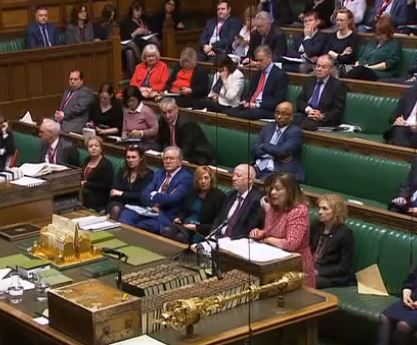 I responded to a further business on Thursday 28 March 2019. Below is my speech in full:

“but that sitting shall not be used for proceedings on consideration of the Overseas Electors Bill.”.

I thank the Leader of the House for the statement, the second business statement we have had today. Mr Speaker, you say that the public are watching up there in the Gallery. They are watching our proceedings throughout the world. They should know that none of us on the Opposition Benches—not a single hon. Member —received a copy of the motion. I came into the Chamber 10 minutes before these proceedings were due to start and it still was not in the Table Office, so it is ​right that my hon. Friend the Member for Rhondda (Chris Bryant) has asked for it to be read out as though it were a bedtime story.

The treatment of this House is absolutely disgraceful. Members are going about their business, but have now been told that they have to come back for tomorrow’s motion. This underlines the Government’s disrespect for the House of Commons and for Parliament.

I have had the chance to look at the motion while sitting here on the shadow Front Bench. [Interruption.] I am not going to say anything until this exchange is over. Is that okay for the hon. Member for South Derbyshire (Mrs Wheeler)? [Interruption.] Good. I need to know whether you, Mr Speaker, are content to see that the law is actually being broken. The motion states that the House approves what was put before the House “on 11 March 2019 so that the UK can leave the EU on 22 May 2019; notes that this approval”— the House is going to note this— “does not by itself meet the requirements of section 13(l)(b) of the European Union (Withdrawal) Act 2018; and resolves that it is content”— hon. Members need to know that they are signifying their content— “to proceed to the next steps of this process, including fulfilling section 13 of this Act”, even though it does not comply with that section of the Act. Is that in order? Is the motion in order? On the face of it, it does not comply with the Act.

The Prime Minister was right then. It seems that she is wrong now. That is why we on the Labour Benches will not be supporting the motion.

This is no way to run a Government. I do not know whether the Prime Minister will come back here, but she has a duty to tell the truth to the House. She has made it clear, on that basis, that the two documents are linked together. We are now presented with a motion that breaks that link. On the face of it, that breaks the law: it breaks the European Union withdrawal law. This is the Government playing games. Parliament, our constituents, future trading partners and the country will not countenance this.