HomeNewsValerie responds to motion on proceedings during the pandemic

Valerie responds to motion on proceedings during the pandemic 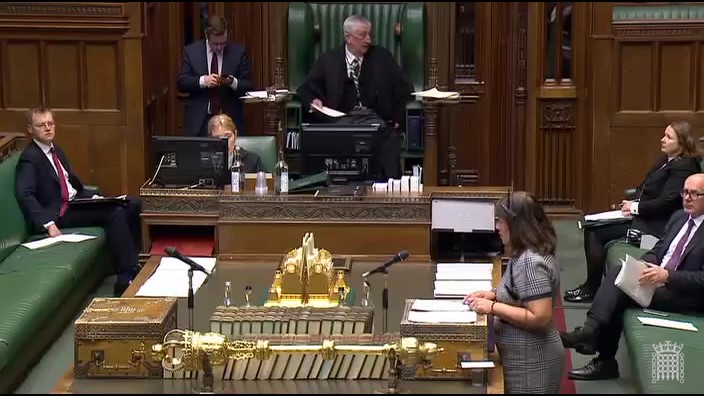 On Tuesday 21 April 2020, I responded to two Government motions: on proceedings during the pandemic and on hybrid scrutiny proceedings. These motions allow Parliament to take an unprecedented step towards “semi-virtual” proceedings. Up to 120 MPs are now able to participate in the House of Commons remotely for the first time in the chamber’s 700-year history. You can read my full speech below:

“I thank the Leader of the House for opening the debate. These are extraordinary times, and today we are debating a process that has shown how the House can move with these changing times. I, too, want to pay tribute to all those involved. It has been an incredible feat by the Clerk of the House and the staff, the Digital Service, the parliamentary broadcasting team and all those involved in both the technical side and in drafting, refining and redrafting the paper that came to the Commission, which led to this motion. I also want to thank the Procedure Committee, which met virtually and made an important contribution to the discussion we had at the Commission.

The Opposition want to engage with the Government at this extraordinary time, and we consider that the ultimate aim is to move to a virtual Parliament, in keeping with Government and Public Health England advice, subject to any technical limitations. Mr Speaker, you chaired the Commission where we discussed and agreed a way forward, which is in the motion before us. We are effectively agreeing to hybrid proceedings, which combine the physical participation of up to 50 Members here and the virtual participation of up to 120 Members. Members will be treated equally, whether they are in the Chamber or virtually present. There will be a shuffle, and parity will be given to all the parties. There will be no bobbing or supplementary points and certainly no ​points of order. Those arrangements are laid out in what looks like the eight commandments—“Thou shalt not do this,” and, “Thou shalt not do that.”

I want to touch on section A, paragraph (2), which states:

“Scrutiny proceedings shall conclude not later than two hours after their commencement”.

I know that the Leader of the House and you, Mr Speaker, think that that is mainly for technical reasons, rather than a prescriptive limit, but it looks to be very prescriptive about how proceedings end. I appreciate that, in terms of parliamentary broadcasting, there may be technical difficulties in the House sitting beyond two hours, but if the Leader of the House could give us an undertaking that that is not as prescriptive as laid out in the motion, that would be helpful. That is literally what will happen—there will be people managing the time, because we have to understand that Clerks at the Table and anyone else have to limit their time here.

We note the consequent Standing Order changes that apply to prayer cards and to the social distancing here in the Chamber, as we can see. On giving notice of questions, I agree with the Leader of the House that the explanatory memorandum is really helpful in setting out what Members should do to apply for their questions. The period runs from Monday to Monday—apart from next week because we are meeting today—so Members have until Thursday to list their questions for the following week.

I know that the staff of the House and everyone else involved are working on how we deal with the debates on legislation. I look forward to the motion that is coming forward on that.

Secure voting is extremely important. We have to make sure that any voting process is secure. We have already seen that there are some rogue emails about, apparently from the Department of Health suggesting that it wants herd immunity, so we have to be very careful about how we vote.

This is going to be an incredible time, Mr Speaker. There is going to be additional oversight from your office, the Table Office, and the Whips Offices on both sides of the House. They are all going to be working incredibly hard to make sure that we can come into Parliament to hold the Government to account and to uphold the democratic process. As the Leader of the House says, these measures will be effective only until 12 May.

It is a matter for Mr Speaker to take points of order. That is part of the wide discretion that he has under other parts of the motion. The key thing—this is what came out of our discussions—is that we cannot interrupt proceedings where Members are up on screens virtually. It would be impossible to interrupt them with a point of order as they are speaking. There will be a ​way of working on that. It may well happen, but it is entirely at Mr Speaker’s discretion. Hopefully he will deal with injustices that may occur in the Chamber.

I think you suggested, Mr Speaker, that there might be a dress code for the House. Certainly there is the issue of what goes on behind Members in terms of animals, children, wallpaper and all that, as we have seen. Clearly the dress code will apply only to the Member’s top half—unless, of course, it is the Leader of the House. I know that he sometimes likes to be horizontal, so for him the dress code will in fact apply to the top half and the bottom half.

I thank everyone for getting us to this position. Subject to certain undertakings, Her Majesty’s Opposition support the motion.”