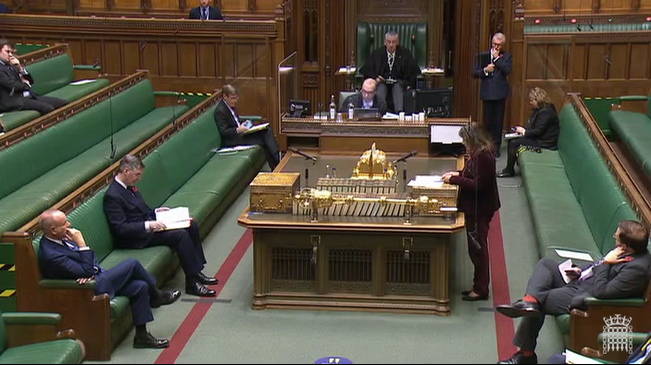 Responding on behalf of HM Opposition during Business Questions on Thursday 5 November 2020, I raised the bypassing of normal Government procurement processes and looked ahead to Remembrance Sunday by paying tribute all those to who have given their lives in the line of duty. You can read my full speech below:

“I thank the Leader of the House for the business. I should like to start by thanking Parliament’s Education and Engagement team for all the excellent work they have done to support UK Parliament Week. They have enabled all our constituents to understand what it is to participate in a democracy so that we know that every vote counts and that they will all be counted equally.

Will the Leader of the House please tell us when this parliamentary Session is going to end? They usually last about 12 months, and it would be useful to know because we would quite like another Opposition day and, as he knows, we get them pro rata. The private Members’ Bills have now been moved to next year. My hon. Friend the Member for Plymouth, Sutton and Devonport (Luke Pollard), the shadow Secretary of State for Environment, Food and Rural Affairs, has asked whether the Animal Welfare (Sentencing) Bill could be looked at by the Government so that it can be taken forward earlier, rather than waiting until next year.

I am pleased that the Leader of the House has realised that voting in the way we vote at the moment is unsafe and that he has extended proxy voting, but I want to remind him that the Procedure Committee said in its fourth report that​

“the system of remote voting used in May was a more effective means of handling divisions in the House under conditions where the division lobbies could not be used in the traditional way”.

I do not know whether he has seen the record, but even those hon. Members who are on the estate have a small p next to their name to indicate that they have cast their vote by proxy. This will give the impression that some hon. Members are not here when in fact they are, so we need to look at that.

I wonder whether the Leader of the House could explain how he thinks democracy works, when some hon. Members can take part only in urgent questions and statements, and Members who are being careful and responsible but cannot be here cannot take part in debates. Debates are the very stuff of what we do, ergo this is not a democratic process. I know that he will be aware that “Parliament” comes from the old French word “parlement”, which means “a place to speak”.

I do not know what it is about this Government, but they are obsessed with tiers, and we now have two tiers of hon. Members—we could say two classes of hon. Members—which is not right and not fair. I want to remind the Leader of the House what he said on Monday:

“We have to ensure that these new coronavirus regulations…are properly debated and that the Government are held to account.”—[Official Report, 2 November 2020; Vol. 683, c. 62.]

I should point out that although the time was extended to three hours, it was not sufficient to hold the Government to account because hon. Friends were unable to take part if they could not be here. They could not do so remotely. That is why this has to change.

Those hon. Members cannot hold the Government to account, but we need to find ways to hold the Government to account because they seem to be bypassing the normal procurement process and helping the VIPs to win lucrative Government contracts for personal protective equipment. How do we hold PPE Medpro to account? It was incorporated in May this year with share capital of just £100, yet it was awarded contracts of £200 million. It was set up by a former business associate of a Conservative peer. How do we hold SG Recruitment to account? It is a staffing agency, and it won two PPE contracts worth over £50 million, despite auditors raising concerns about its solvency. A Tory peer sits on the board of its parent company. How do we hold P14 Medical Ltd to account, which is controlled by a former Conservative councillor and has been awarded three contracts worth £276 million, despite having negative assets?

Parliament is giving the Government unprecedented powers, so could the Government prove to us that they are not misusing public money? Decisions so far have been characterised by cronyism and incompetence—and I have not even got on to Randox yet. I ask again, could we have a list of all the contracts that have been awarded under the coronavirus regulations and any declarations of interests? The shadow Chancellor of the Duchy of Lancaster has asked for an inquiry. It would be very simple to publish every single contract.

We need an urgent ministerial statement on what the head of the Vaccine Taskforce has said. If it is an official, sensitive Government document, why was it disclosed to people who spent $200 to hear that inside ​information? If it is not, why do we not all know about it? Could we have an urgent statement on who the head of the Vaccine Taskforce is accountable to?

Thank you, Mr Speaker, for granting an urgent question to my hon. Friend the Member for Hampstead and Kilburn (Tulip Siddiq) on Nazanin. That was the sixth urgent question about her. The Minister for the Middle East and North Africa said nothing about Anousheh, although he accepted that the debt is 40 years old—that is older than Nazanin. We also have to remember Kylie and Luke Symons. I look forward to receiving the letter from the Foreign Secretary that the Leader of the House has kindly facilitated.

Finally, Sergeant Matt Ratana’s funeral was held yesterday. We remember all those police officers and frontline staff who have given their lives in the line of duty. I know that Remembrance Sunday will be slightly different this year, but nevertheless, we will remember everyone in the same way. It will be more poignant because of those who have given their lives to save us. I think the Kohima epitaph will apply to everyone, which says:

“When you go home

Tell them of us and say

We gave our today.”