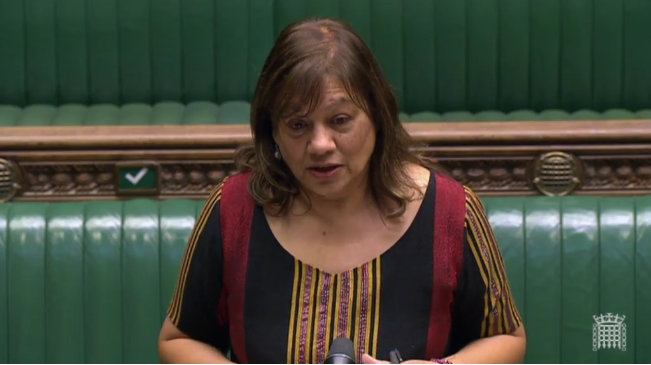 At Business Questions on Thursday 26 November 2020, I highlighted the Government’s misuse of public money and failure to uphold the law. You can read my speech below:

“May I thank the Leader of the House for the business and ask again about the end of Session? Obviously, that is not going to be in November. I can only assume it will be May, but it would be helpful to know, particularly as we would quite like another Opposition day. I think ours was taken away last time.

May I ask for a statement, again, on the progress of the EU talks from the Prime Minister? I think he has stopped shielding, or hiding from the European Research Group or China Research Group or whichever group we have now. We may be in lockdown, but we are not in a Government news lockdown.

The Department for International Development has been abolished and we know that it has gone into the Foreign, Commonwealth and Development Office. Could the Leader of the House set out what plans the Government have for re-establishing that Department in some form or another, or maybe keeping the Select Committee as it is, given that it needs to look at overseas development aid?

I hope that the Leader of the House will bring back the motion on virtual participation. We all want a much longer debate than we had on Tuesday. Let us remember: it is the Government who prevented participation of our colleagues, pitching one colleague against another through a restrictive and discriminatory definition. It is that stubbornness that is preventing our colleagues from taking part.

Let me quote something that I did not have time to quote on Tuesday. It states that

that means made better and bigger—

The House staff think that this can be done. Why do the Government and the Leader of the House not think so?

Let us turn to the spending review. The Chancellor has made available £4 billion of a levelling-up fund. It is a bit like a gameshow now, pitching one community against another—“I’m a levelling-up project, gimme the money!” Last week, I raised the NAO report and the possible misuse of public money whereby one Minister gives money to another Minister in the constituency. I am sure the Leader of the House will know—I know the Government have issues with the Electoral Commission, an independent body—that the shadow Minister for voter engagement and young people, my hon. Friend the Member for Lancaster and Fleetwood (Cat Smith), has asked the Electoral Commission about the misuse of public funds in relation to ads in targeted seats just before the election, with majorities of fewer than 5,000. They were told, “You’re going to get £25 million of investment in your town.”

If this is going to continue, will the Leader of the House ensure that proper criteria are published? We need to know which Department will be responsible for it, because there are three involved—the Treasury, Transport, and Housing, Communities and Local Government. Better still, why do the Government not just give the money to the local authorities on proper criteria, as they have done for years? Those authorities are all in deficit; they have all been struggling. Even better, give the money to key workers. Public sector workers have had a slap in the face in not getting an increase in their salaries, which is just levelling up after 10 years of Tory austerity.

Under the spending review, the Chancellor has set out funds to support getting people back to work—the Restart scheme. On Tuesday, there was a joint press release with Ministers and Scottish Ministers saying that a really important company, Burntisland, is going to lose highly skilled, specialist jobs that are here in Scotland. Hundreds of employees do not know whether they have a job or not. Could we have an urgent statement from the Secretary of State for Business, Energy and Industrial Strategy to continue these discussions, so that we do not lose those vital jobs?

This is not a party of law and order; this is not a Government of law and order. On Tuesday, the Secretary of State for Education was found to have acted unlawfully in watering down safeguards for protecting children. He excluded the Children’s Commissioner, among others, from his decision making, and 65 separate legal protections were watered down. Can we have an urgent statement?

The Equality and Human Rights Commission found on Wednesday that the hostile environment referred to by the shadow Lord Chancellor breached equalities law. What about the Secretary of State giving a job to his friend, who was first unpaid—an unpaid lobbyist—then became a non-exec director, paid with public money, and then received an access all area pass from another Minister? Could we have an urgent statement? I know the Leader of the House does not like to have people who are overqualified for jobs if they have been members of the Labour party, but having someone who is a friend, who does not go through normal employment practices, is not right.

Parliament Week has been a great success. David Clark and the team have undertaken 8,700 activities and reached over 980,000 people. All of them have done a fantastic job explaining our democracy. On behalf of everyone, I thank David Clark and wish him well in his new post. I understand that he is popping up in an office near you, Mr Speaker—literally near you.

Kylie has been released. Daren Nair of Amnesty International thanked the Australian Parliament and our Parliament for making sure that Kylie’s name was never forgotten, and we want to do the same for Nazanin, Anoosheh, and of course Luke Symons. We want them home before Christmas.

Finally, we remember Bruce Boynton of Boynton v. Virginia, one of the first Freedom Riders. May he rest in peace.”