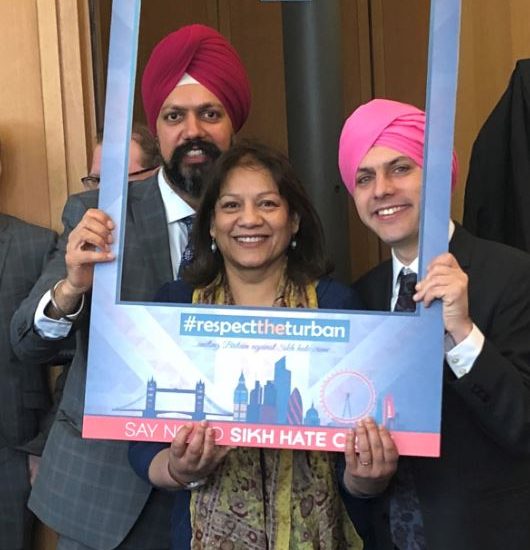 I attended Turban Awareness Day in Parliament on Tuesday 27 March 2018, organised by the Sikh Channel, to promote diversity and create awareness of the Sikh Turban, the Sikh Faith and its contribution to the British way of life, industry and culture. Above I am pictured with the first British turban-wearing Sikh MP Tan Dhesi and Alex Sobel MP.

I am alarmed by the recent incident that took place outside Parliament on 21 February 2018 where a racist attacker attempted to remove the turban off a Sikh gentleman whilst shouting racial abuse. Hate crimes have risen 57% nationally following the results of the EU referendum.

All forms of racism, anti-Semitism and Islamophobia cannot be tolerated. It is important that we stand together to show that this kind of deplorable behaviour is not acceptable in our society.

In Parliament, MP’s from every background have united to fight hate crime by celebrating diversity together with members of the Sikh community.

The word Sikh means ‘disciple’ – follower of the True Guru. The Sikh faith was founded in Northern India in the fifteenth century by Dhan Dhan Sri Guru Nanak Dev Ji, the first of the eleven Sikh Gurus. The Sikh faith is monotheistic and stresses the equality and wellbeing of all humanity.

Sikhs believe in three basic principles: meditating on the name of God (praying), earning a living by honest means and sharing the fruits of one’s labour with others in need. The Sikh faith rejects caste and class systems and emphasises service to all mankind.