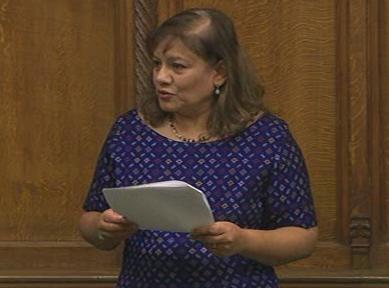 On Tuesday 8 October 2013, Valerie Vaz, MP for Walsall South, secured an adjournment debate in the House of Commons on the Government’s policy on Burma.
Valerie said:
“I am grateful to Mr Speaker for granting us this debate, which seeks to place on the record details of our recent Speaker’s delegation visit to Burma. I was pleased to be asked to join Mr Speaker, Fiona Bruce MP and Sir Malcolm Bruce MP on the Speaker’s delegation to Burma. Mr Speaker said he wanted to leave a lasting legacy of help and support to Burma and Daw San Suu Kyi.”
“May I pay tribute to Mr Speaker for holding together and being the focus of the 24 meetings we had over eight days, and acknowledge his courageous speech at Yangon university.”
Valerie said:
“In the debate I outlined a 10-point plan of action for the British Government:
1. One person should co-ordinate or keep track of what work Britain is doing, based in either the Foreign and Commonwealth Office or the Department for International Development.
2. The work on setting up the library and research facilities for MPs should have a time limit.
3. There should perhaps be an induction course like the one we had for new Members in 2010. We already have the blueprint, so that could be done now. We could also offer work with the Select Committee structure. I do not know whether you recall, Mr Speaker, but one person asked, “How do we clone these officials?”
4. Will the FCO or DFID work with the Burmese Government to ensure that humanitarian aid workers do not have to keep applying for a permit for different areas? The international organisations should be able to negotiate that. We also heard that Médecins Sans Frontières doctors cannot work alongside Burmese doctors—why not?
5. There needs to be constitutional reform before the elections in 2015, not least to lower the age of MPs. Although age is quite rightly revered, many young people we met were ready to serve and want to be MPs. Importantly, Daw Suu should not be excluded from taking part in the presidential elections, but she currently is.
6. There should be regular discussions on the release of political prisoners. Can the Minister say what has become of those on Mr Speaker’s list? But might we also look to others who, you will recall, Mr Speaker, we heard may have committed serious crimes? Perhaps an international lawyer could review those cases.
7. Progress must be made on setting up the office of the United Nations High Commissioner for Human Rights.
8. On the ethnic issue, there should be a new Panglong conference—along the lines of the Northern Ireland Good Friday agreement. You will recall the number of times we said we had sorted things out in Northern Ireland. We know that people who were involved in Northern Ireland, who can help, are active in Burma. We need to get people into a room and draw up a schedule and heads of agreement. Perhaps someone like Mary Robinson could play the role of a George Mitchell character. She could chair such a conference.
9. Civil society groups, which came together so notably during Cyclone Nargis, should be supported. Currently, they have to register as organisations; otherwise, they are deemed to be illegal. Could the FCO or DFID look at ways of supporting these organisations without going through the Government?
10. The rule of law needs to be firmly established, with an end to arbitrary arrests. People need to know the case against them and to have a fair hearing before an impartial court.”
Valerie said:
“Burma knows that it is at a unique place in her history. Having met the Burmese people, I can see why Daw Suu could not leave them to suffer, and although there is progress, people are still being displaced and there are conflicts. However, there needs to be an irreversible move to democracy and the rule of law, so that the Burmese diaspora feel they can return to their country, and those who live there, eager to serve their country, can do so and live together in peace.”
Additional Information:
Link to official text of adjournment debate: http://www.publications.parliament.uk/pa/cm201314/cmhansrd/cm131008/debtext/131008-0004.htm#1310093000154
The delegation consisted of the Right Hon John Bercow MP, Sir Malcolm Bruce MP (Chairman of the International Development Select Committee), Fiona Bruce MP (member of the International Development Select Committee), Valerie Vaz MP (member of the Burma All Party Parliamentary Group) and members of the House service.