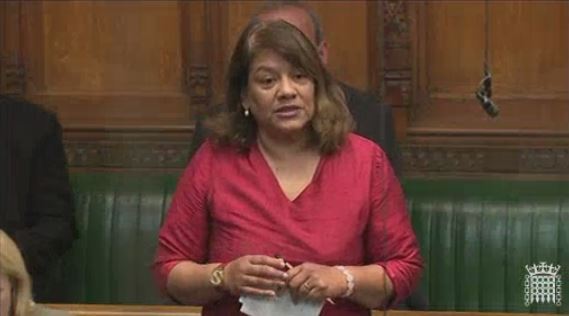 On Thursday 18 December 2014 Valerie Vaz, Member of Parliament for Walsall South, secured a meeting with the Rt Hon Norman Lamb MP, the Minister for State for Care and Support, after raising the John’s Campaign in the House of Commons Christmas Adjournment debate.
Valerie Vaz MP said:
“I heard about John’s Campaign from Julia Jones and Francis Wheen. They told me about Nicci Gerrard’s father, Dr John Gerrard, who had Alzheimer’s and died in November 2014. Nicci was not allowed to provide the continuation of his normal life such as reading to him or playing chess when he was in hospital. Nicci considers this led to his dementia getting worse.”
“The aim of John’s Campaign is to extend to family representatives of patients who suffer from dementia the same rights as parents who have children in hospital. Parents are encouraged to spend as much time as they can in the hospital with their children. To draw attention to the Campaign I tabled an Early Day Motion on John’s campaign and the right to stay with Dementia Patients in Hospital which has been signed by a cross party group of 43 MPs”
“My research has shown that currently the University Hospital Bristol is allowing carers to stay with their relatives. Bristol have a Carers Charter to promote a culture that recognises and values carers and their needs within a hospital. Ward staff have an initial and daily conversations with the carer who is allowed to care for the patient outside of visiting hours. This should be adopted across England”
“After raising John’s Campaign in the Christmas Adjournment Debate on Thursday 18 December, I am pleased the Minister of State for Care and Support agreed to meet with myself, Nicci, Julia, Francis and other members of John’s Campaign. If the Minister agrees this could dramatically help those with dementia as they can struggle to understand and communicate with strangers in unusual surroundings such as hospitals. This change would help those who support their loved ones in difficult times, and do so in John’s memory.”
Valerie Vaz MP’s Early Day Motion 586: John’s Campaign and the Right to Stay with Dementia Patients in Hospital:
“That this House notes that there are 800,000 people in the UK with dementia and that one in three people over the age of 65 will develop the condition; praises the families and carers of patients with dementia who are vulnerable and can often be distressed and disoriented; further notes an article in The Observer newspaper on 30 November 2014 by Nicci Gerrard whose father, Dr John Gerrard, was diagnosed with Alzheimer’s in his mid-seventies and died in November 2014; further notes that his family were restricted in the amount of time they were able to spend with him in hospital when he was admitted in February 2014 for a separate condition; further notes that his family were not able to provide a continuation of his normal life when in hospital, such as talking and reading to him and that as a result when he came out of hospital his Alzheimer’s had worsened; and calls on the Government to support the same rights for families and carers of dementia sufferers as parents of sick children and allow for family representatives to stay with the patients at any time of the day as dementia sufferers can struggle to understand and communicate with strangers in unusual surroundings.”
http://www.parliament.uk/edm/2014-15/586
Nicci Gerrard’s article ‘My father entered hospital articulate and able. He came out a broken man’ in the Observer on Sunday 30 November 2014 is available here: http://www.theguardian.com/society/2014/nov/29/nicci-gerrard-father-dementia-hospital-care-elderly http://www.parliament.uk/edm/2014-15/586