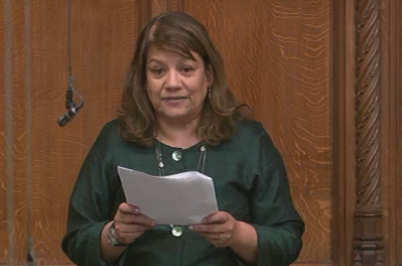 On Thursday 27 June 2013, Valerie Vaz, Member of Parliament for Walsall South, spoke in the Backbench Debate on Legal Aid Reform.
Valerie Vaz MP said:
“If the Lord Chancellor really wanted to engage with hon. Members, he would be sitting in the Chamber today. All hon. Members on both sides of the Chamber know how important, significant and seismic the Government’s proposals on legal aid will be if they are implemented. It is noteworthy that the Law Society, the Criminal Bar Association, the panel of counsel, the President of the Supreme Court, barristers, solicitors, the Equality and Human Rights Commission and our constituents are all ranged against the proposals and against the Lord Chancellor. We know why he is not sitting here today.”
“Judicial review is an important branch of law. Of course, the Executive do not like it because it holds the Executive to account—it looks at how public bodies come to a decision. Given the legislation enacted since 2010, it is no wonder that the Government want a neutered judicial review. No one can predict the outcome of a case, so having to make a judgement that there is a 50% chance of winning to receive legal aid, is absurd. Evidence has to be heard from both sides and a decision is made based on arguments that are made before an impartial judiciary.”
“Lawyers are obliged to advise a client whether a case has merits before they proceed. What about the figures for judicial review? They are not increasing exponentially. A written answer to me revealed that in 2009 there were 2,145 cases in judicial review, with that figure going up to only 2,304 in 2011. In criminal judicial review, it was 316 for 2011. Those are just the figures for cases lodged; they are not even the figures for cases that have gone to completion.”
“What of price competitive tendering? The number of contracts is to be reduced from 1,600 to 400. The west midlands can expect only 20 firms. According to the Law Society, however, approximately 800 firms operate in the west midlands. The Magistrates’ Association, another voice against these proposals, says that there appears to be little consistency in the number of contracts allocated to each area. The idea that one would get paid irrespective of how one’s client pleads is absurd. That is not justice; that is plea bargaining. The Lord Chancellor should know the difference.”
“This is another policy from the Government that will benefit those who can afford it at the expense of the weak and vulnerable. There is no evidence for the policy. The Lord Chancellor has no mandate from the people, and no moral, legal or financial argument to continue with this course of action. He is tampering with one of the important checks and balances of the state. He is trying to weaken the golden triangle of Parliament, the judiciary and the Executive that underpins the rule of law and the framework of a good society—our society. These proposals are toxic to society and should be withdrawn.”
The Transcript of Valerie Vaz’s Legal Aid Reform Speech can be found here: http://www.publications.parliament.uk/pa/cm201314/cmhansrd/cm130627/debtext/130627-0003.htm