The President of Azad Jammu and Kashmir, Sardar Masood Khan, spoke at a meeting in Parliament on Thursday 17 October 2019, which I attended . We heard first hand about the ongoing situation of how the lives of the people in Kashmir are being affected.

I spoke at the meeting and raised concerns about how my constituents who have families and friends in Jammu and Kashmir are facing difficulties. This is about the welfare of human beings. The communications blackout now lifted  meant families had no idea about the safety of their loved ones. People within Kashmir are having to use short-wave radios in order to communicate.

I suggested that there should be a delegation of all Parliamentarians at the meeting to go to the Foreign Office and demand that the Government acts to help to resolve this conflict.

I said that in the end it was a right of the people of Kashmir  for self determination and to live in peace. 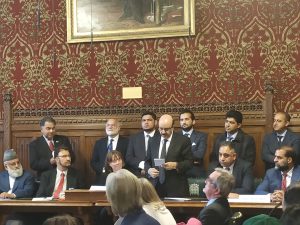 President of Azad Jammu and Kashmir, Sardar Masood Khan (above), said the people of Jammu and Kashmir must determine their own destiny. This is not a small population; the destiny of 20 million people is at stake. He said that occupying forces conducted routine search operations to harass Kashmiri citizens and that hospitals have turned into graveyards.

President Masood warned of the threat of a nuclear exchange as analysis has shown that a nuclear exchange could result in 130 million dead and 2.5 billion people being effected by radiation. He said that this is not a bilateral issue and called on the UK Government to intervene to save Kashmiris and the region from the scourge of war.

Hurriyat leader and Chairman Jammu and Kashmir Salvation Movement (JKSM) Altaf Ahmad Bhat said schools and business have been shut since 5 August 2019. Educational institutions have been turned into army camps by the Indian troops. He added that the Kashmiris looked up to the United Kingdom to push for a permanent solution to the conflict.

I met with my constituent Iman Rehman from Aisha Mosque (pictured below) who was at the meeting. 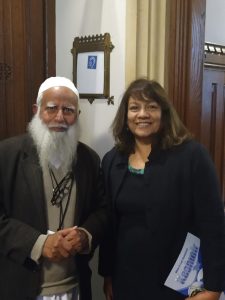