I spoke at the launch of the New Brooms book in Parliament on Wednesday 12 September 2018. Mr Speaker and James Frith MP, who edited the book, also spoke at the event.

New Brooms is a set of important essays by 11 recently elected Labour MPs who have come together with ideas about how Parliament should be changed. The book was published by the Fabian Society and The Joseph Rowntree Reform Trust.

As Shadow Leader of the House, I was asked to provide a foreword for the book which you can read below:

Each new intake of the House of Commons looks afresh at how Parliament works and eleven Labour colleagues from the ‘surprise’ 2017 general election have acted on their experience of their first year as MPs.

The result is this collection of ideas for parliamentary reform, edited by James Frith MP, a new dad to Bobby in the year he was elected who no doubt helped to sharpen his perspective, and aided by Luke Pollard MP.  My colleagues tackle issues from the accountability of Ministers to Parliamentary behaviours and culture to improve public access, from legislation and debates to making parliament a modern workplace in essays brimming with creativity.

These are ideas whose focus is to ensure we can deal with the needs of our constituents as well as enabling parliamentarians to have time to step out of our cloistered workplace both physical and intellectually. This will add to the understanding of the work of parliamentarians in the 21st Century.

The confluence of tradition and modernization is the tipping point. And so it is right that each new Parliament should reflect on its practices and how they can strengthen our democracy.  Since I was elected in 2010 for example, the extensive use of the Urgent Question initiated by Speaker Bercow has meant that Parliament can react to national and international events immediately as a government minister must come to the House of Commons to respond the same day.

As we celebrate the centenary of the election of the first woman to the House of Commons, Constance Markievicz from the Dublin St. Patrick’s Division, we remain far from gender parity in our Parliament. Modernization and further democratization should be a priority in the crowded political discourse.

The authors should be congratulated for distilling their ideas, and the Fabian Society and Joseph Rowntree Foundation for disseminating these proposals.  Not everyone will agree with all the suggested measures but I welcome discussions with colleagues from across the House on the future of our Parliament and this book is a significant starting point.

These important authors have taken the initiative with thoughtful and often daring proposals which deserve a wide audience and serious discussion by anyone wishing for a modern parliament relevant to those elected and the people who elect us.

You can read New Brooms by clicking here. 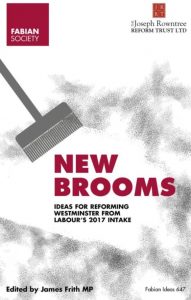