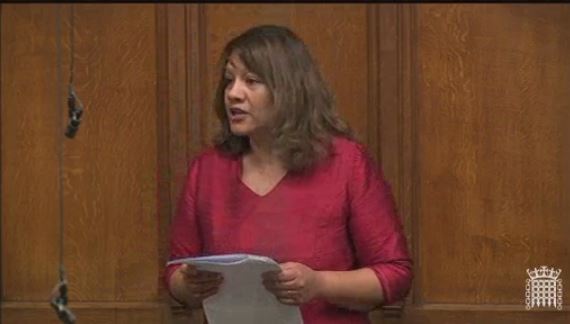 On Monday 9 June 2014, Valerie gave a speech in the House of Commons at the Queen’s Speech debate. Valerie called into question the Government’s claims of building a stronger economy and a fairer society.
Valerie Vaz MP said:
“The Coalition Government has implemented a 40% tax cut for those earning more than £150,000, while at the same time some are struggling to pay the extra rent for the bedroom tax or a spare room. Those are among the most vulnerable people in society.”
Valerie Vaz on Public Sector Cuts:
“There has been a continued assault on the public sector, and as we start the new session, there are still unanswered questions about the Royal Mail privatisation. There are plans to privatise the Land Registry, the possibility of the east coast railway, the Forensic Science Service, the scientists at Kew Gardens. The Government is interfering with services that are profitable, safe and should be left alone to carry on with their expertise for future generations.”
“The chief inspector of Ofsted has said that he will end its contracts with third-party services and employ school inspectors directly, because he thinks it is too important. So are all those other services and so is the legal system, but that does not seem to bother this Government. This is a giant jumble sale of the public sector.”
Valerie Vaz on Housing:
“The Gracious Speech contains a statement about selling off-high value Government land. This is land and assets that belong to the British people and they will be gone for ever. The Government do not need to sell off high-value Government land for housing. Houses can be built on land where there is already planning permission.”
“People in this country can use their creativity to find new ways to design new homes and build them, such as the programme developed by Walter Segal where people on the housing waiting list in Lewisham were taught how to build their own homes. That gave them expertise and empowered them, and the houses were sustainable.”
Valerie Vaz on Fracking:
“The Gracious Speech will allow fracking under people’s homes whether they want it or not. There is no definitive evidence that fracking works. Some 75% of the chemicals used in fracking are toxic and 25% are carcinogenic. There are concerns about its effects on the environment and on public health.”
Valerie Vaz on the NHS:
“It is no coincidence that the Gracious Speech is silent on the NHS. Instead, the Secretary of State wants to punish the very people who have borne the brunt of the reorganisation that, by conservative estimates, amounts to £3 billion. He says the NHS staff cannot have a 1% pay rise. He is withdrawing funding from front-line services, such as GPs’ minimum practice income guarantee, which affects surgeries in places such as Tower Hamlets and some rural practices, and which will be withdrawn from Wales a year later. The Secretary of State cannot blame the Welsh Assembly Government for that.”
Valerie Vaz on NHS Accountability:
“There is a lack of doctors in A&E because they are going abroad. Where is the long-term plan to end that crisis? Where is the Secretary of State’s response, other than leaving it up to NHS England? The lack of accountability has been exposed since the implementation of the Health and Social Care Act 2012. Nothing has been done. Instead, we get announcements about community hospitals without consultation with local people about which hospitals are needed and where they should be placed. The Government want to use public money in their own way, but they do not want to be accountable for it.”
“Her Majesty’s Opposition will repeal the Health and Social Care Act, which has caused chaos, insecurity and inequality in the NHS and repeal section 75, which forces competition, not collaboration, wasting millions of pounds on legal advice.”
Valerie Vaz on NHS Redundancies:
“There is a provision for redundancies to be capped. The revolving door and merry-go-round of people being made redundant and then rehired as consultants in the NHS has been exposed time after time by Her Majesty’s Opposition.”
“That public money could be used for my constituent Grace Ryder, aged 9, who was recently diagnosed with type 1 diabetes. She wanted to draw attention to this and raise money for charity, so on Saturday she helped to organise a fair at Delves Baptist community church. This courageous girl has to wear a cannula in her stomach for the delivery of insulin. There is an alternative—a pod that has no tubes—but it is not available on the NHS and the family cannot afford the £90 per week that it costs. Instead of these vast redundancy payments, money should be spent on the courageous Grace Ryder and other children to help them lead as normal a life as possible. I would ask the Secretary of State, if he only bothered to listen, whether he is as courageous as Grace Ryder. Can he make this insulin pump available on the NHS?”
Valerie Vaz on Going Forward:
“To promote a fair, just and more equal society we need to tilt the balance back to the British people. The Government should look again at the scaling back of the Equality and Human Rights Commission and the equalities agenda. The organisation was there to help and to provide evidence for some of the myths that abound that may explain why some communities are not tolerant of each other.”
“Equality, opportunity, justice and tolerance should be the foundations of the Gracious Speech and our society.”
Further Information:
The Official Report of Valerie Vaz MP’s speech can be found here: http://www.publications.parliament.uk/pa/cm201415/cmhansrd/cm140609/debtext/140609-0003.htm#14060930000303