HomeNewsValerie Speaks in the Budget Debate

Valerie Speaks in the Budget Debate 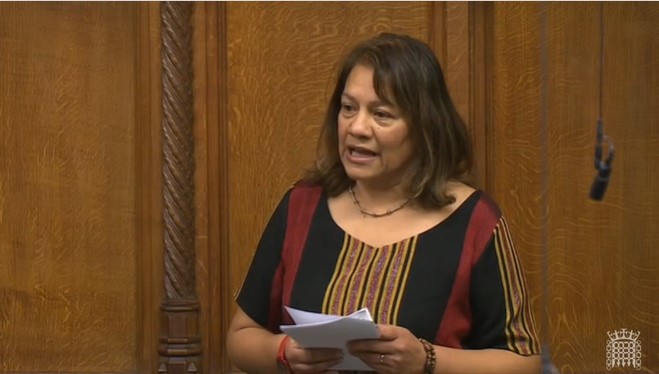 There was a continuation of the debate on the Budget Resolutions and I spoke on the last day before the votes on Tuesday 2 November 2021 in the Commons. The Budget failed to focus on the challenges facing children, the environment and our local communities.

You can read my full speech below:

“It is a pleasure to follow the hon. Member for Bishop Auckland (Dehenna Davison), but I am sure she will agree that this Budget is a wasted opportunity. It is a missed opportunity because the Chancellor did not focus on an ambitious future for our country and for those on the frontline during the pandemic. This is a conflicted Chancellor, who is giving money to bankers by cutting the surcharge on bank profits from 8% to 3%, but has nothing on tax evasion or avoidance. Welcome relief is being provided for theatres and galleries, and I hope that that means the new art gallery in Walsall will not have to scrounge and scrabble around for money every year. Of course, we also have the 50% business rate discount for businesses in leisure, hospitality—an area the hon. Lady mentioned—and retail, and the benefit change.

However, this is a contradictory Chancellor. He said he wanted to support the imagination and drive of entrepreneurial people, but the 3 million self-employed and small entrepreneurs who did not qualify for covid relief—the excluded—still do not qualify for any other support. He is the Instagram Chancellor—the Insta Chancellor, although none of the money is coming instantly, as he said himself. Everything is going in in 2024-25, before the next election, but we need something now, and I want to focus on three areas: young people, communities and the climate emergency.

First, on education, I am sorry to say that the Government lack ambition for our children. Walsall schools have been suffering: they have been on the frontline for the past two years, making sure that the children of key workers, and other children, are educated. The recovery package for children is so bad that the Government’s own commissioner had to resign. Sir Kevan Collins asked for £15 billion but was allocated £5 billion, spread across 8.2 million children—that is less than £500 per pupil. Members can compare that with the Netherlands, which is spending £2,100 per pupil.

The Chancellor has rejected the idea of extending free school meal provision for three years, thereby affecting the health and wellbeing of millions of children throughout the country. He should have supported parents and teachers by facilitating a nurse or counsellor in every school, to help with children’s mental health. Or he could have funded a tutor or two, targeted at each school, to help teachers and classroom assistants. That would be a catch up, but 60% of schools have not even recovered from using their budgets for covid, and there is nothing for them. Schools in my constituency have had to get food bags ready for their pupils.

What are family hubs when we had Sure Starts? Sure Start Palfrey was rated outstanding by Ofsted twice, yet it is now closed. The National Youth Agency found this year that local authority annual expenditure on youth services has dropped by £l billion. Children in affluent areas of England are twice as likely to have access to youth clubs and other out-of-school activities as children in poorer parts.

The youth service in Walsall had a building on the Narrow Lane site in Pleck, but Walsall Council has now pushed through a Traveller transit site at that location. A better site was identified in the Site Allocation Document. Worse still, in the Black Country Plan,  Walsall has 23 permissions or allocations of land for Gypsy, Roma and Traveller communities, whereas Dudley has only two. Instead of investing in young people, the Council has chased them off the site, to waste money right in the heart of the community in Pleck.

What about communities and local economies? Of the towns fund recipients announced in spring this year, 39 out of the 45 were in tier 1 Conservative constituencies. I do not recall the Chancellor namechecking any Opposition constituencies in the Budget speech.

The UK shared prosperity fund does not deliver the £1.5 billion a year until—wait for it—2024-25. Funding for next year is just £400 million, so the Government are failing even to replace the EU funds.

What about our high streets? There has been no support for retail and supermarket workers—those on the frontline who worked during the pandemic to keep the country fed. To ensure that work pays, the minimum wage should have been raised to at least £10 an hour and there should have been an end to insecure contracts. Or perhaps there should be a real living wage that people can live on once the basic living costs are taken off.

If the Chancellor wanted to regenerate our high streets, he could have closed the loophole in respect of online sales taxes to help high street retailers, just as the French are doing to support their bookshops.

What about climate change and the climate emergency? This week, the most dramatic thing is happening in Glasgow—the Conference of the Parties COP26—but there was no mention of it in the Budget. It is not about us; it is about future generations. Even now, the Government are rowing back on their 1.5° commitment. This contradictory Chancellor lowered air passenger duty for short-haul domestic flights, but there was no mention in the Budget of alternatives such as public transport and no mention of High Speed 2 or the integrated rail plan.

Perhaps the conflicted Chancellor should have listened to Insulate Britain instead of the airlines. The Government said there would be extra money for heat pumps for 600,000 homes a year, but no—money has been allocated for just 30,000 a year. That is one in every 250 households.

What about the restoration of solar panel tariffs? The Government stopped the subsidies for new applications in 2019. More than 800,000 households had installed solar panels since 2010, but the Government announced a 65% cut to the tariff.

Sadly, a new food bank has opened in the Saddlers Centre. Families have been hit hard by the covid crisis.

There is not much in the Budget for those who looked after us during the pandemic: the NHS pay rise is a paltry 3%. That is a missed opportunity to say thank you. Unison did a survey and found that 80% of NHS staff were against the 3% rise.

There is nothing allocated in the Budget so that we can learn the lessons of the covid inquiry, and nothing for our young people, our communities or our glorious planet. We have an Instagram Chancellor with no instant plan. I hope he will reconsider and make his plans more ambitious, for the good of our country.”