HomeNewsValerie speaks at emergency debate on Government and Parliamentary proceedings

Valerie speaks at emergency debate on Government and Parliamentary proceedings 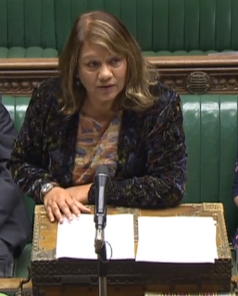 I start by thanking you, Mr Speaker, for granting this debate, following the application from the right hon. Member for Orkney and Shetland (Mr Carmichael) yesterday.

While the motion reads,

“That this House has considered the Government’s policy in relation to the proceedings of this House”,

I would prefer to deal with two aspects of it separately: the constitutional convention that decisions of Parliament are enacted by the Government and the scheduling of Opposition days throughout the year as set out in Standing Orders. Speaking in support of the motion, I will start with the allocation of Opposition days. ​The Government have often to be brought to the House for bypassing and—I hope I do not put this too strongly—appearing to have contempt for the House. The two-year Session of Parliament was announced by press release on 17 June 2017. The right hon. Lady could have announced it during business questions on 22 June, her first outing as Leader of the House, but she did not.

A Session usually starts in November and runs until the following October. On average, there used to be four Sessions in a Parliament, but that was before the Fixed-term Parliaments Act 2011; there is now an assumption of five Sessions. Each Session carries an allocation of Opposition days, as set out on page 334 of “Erskine May” it says:

“Standing Order No 14 provides that on 20 days in each session proceedings on business chosen by the opposition parties shall have precedence over government business.”

These books on the Table are not window dressing: “Erskine May”, Standing Orders—they are there because they are the rules of the House, as interpreted by the very honourable Clerks. As you know, Mr Speaker, there have been numerous requests for the full allocation of Opposition days—you have heard me ask the Leader of the House for the dates at business questions—but they have not been forthcoming.

Mr Speaker, you have heard me ask for clarification several times, and we have had numerous discussions through the usual channels, but we have had absolutely nothing. It is sad that Parliament is treated this way. I did not think that, in the first week back after the conference recess, I would be standing here arguing for the same thing I did before the recess.​
We play a vital role in our democracy. The use of the term “Her Majesty’s Opposition” was first coined in 1826 by John Cam Hobhouse and was given statutory recognition in 1937. The official Opposition is defined as

“the largest minority party which is prepared, in the event of the resignation of the Government, to assume office”.

That is an important constitutional role, and we should not be prevented from doing our job. We would like to fulfil that role but that is the effect of not giving us dates for our debates. The Government want to stifle debate and so deny all the Opposition parties a chance to challenge them and put forward their policies.

Secondly, having been given that Opposition day on 13 September, the shadow Secretaries of State for Health and for Education moved and spoke eloquently to their motions, and we then witnessed the bizarre spectacle of the Government making no comment whatsoever. They had tabled no amendment to the motion. There was no voting for and no voting against, so Parliament was left in limbo. What was the status of the motion? It was a proper, substantive motion, defined as a self-contained proposal submitted for the approval of the House and drafted in such a way as to be capable of expressing a decision of the House. And it did, in this case to NHS workers and students about to start university.

The hon. Lady is right to make the point that the Chamber is not just a hothouse of debate. It is about what people want to listen to, to find out what is important. There are parents in the country who are quite keen to hear the views of all the political parties about how to address the very sad problem of baby deaths. Is she embarrassed and ashamed that she and her colleagues are detaining the House by having a debate about debates, and not about the issues?

I thank the hon. Gentleman for his intervention, but he is wrong. My family has suffered a baby loss. This is a very important date, because it is the anniversary of the death of my brother’s baby, my brother being my right hon. Friend the Member for Leicester East (Keith Vaz). I know how important the issue is, but this is not a debate about a debate. People throughout the country want to know what is going on and what we do in Parliament. They want to know that their Parliament is supreme. They want to know that we are debating and discussing.

The position that was outlined in the motions appeared in the manifesto of the Democratic Unionist party, and its members owe their electorate an explanation of why they did not vote in support. Because the DUP has a confidence and supply agreement with the Government, the Government knew that they could not command its support, and would have lost the vote. That is significant, because the confidence and supply agreement itself has to come before the House to be debated. Again, it takes the courts to tell the Government what parliamentary democracy means. Worse still, the Government then decided, during the conference recess, that the Opposition’s policies on those two subjects would be their policies. The right hon. Member for Forest of Dean (Mr Harper) will know that the Government made a statement on both policies.

The right hon. Member for Orkney and Shetland mentioned a journalist who is well known around the House, and who suggested that the Government were ​not intending to vote against or amend our motions, but would sit on their hands for all our Opposition debates.

There were many points of order about the tweet from the journalist—I need to protect my sources, but it was Paul Waugh—stating that this is what would happen, and the matter was also raised in business questions. The Leader of the House then said, “Don’t believe everything you hear on Twitter.” I can understand that for the President of the United States, but the Leader of the House also tweets. Are we to believe her or not?

This makes a mockery of Parliament. Parliament is a forum for debate, discussion and amendments, as seen in the example given by the excellent Minister, Phil Woolas, who listened to the House, even though he was ambushed by a celebrity, and changed his policy—whether or not that was the right thing to do. Nevertheless, he said, “I have listened to the House.”

Finally, in the preface to Erskine May, the guide to the law, privileges, proceedings and usage of Parliament, there is a dedication to you, Mr Speaker. It entrusts you with the great responsibilities of guardianship of the parliamentary system. You have done that many times in this House, and in granting this debate. I ask you to convey to the Government that they must abide by that dedication.