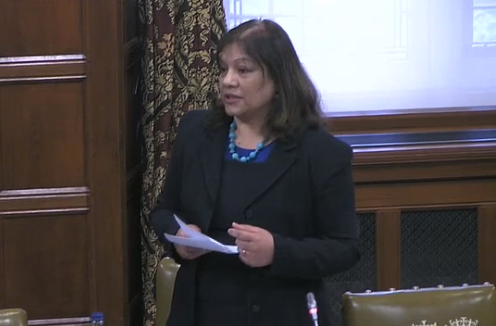 On Wednesday 23 March 2016 I spoke in a Westminster Hall debate on Burma highlighting the issues of internally displaced people, the need to protect victims of sexual violence, PSVI Initiative and hope for the future.

Here is my full speech:

Valerie Vaz: As always, it is a pleasure to serve under your chairmanship, Mr Owen. I thank the hon. Member for Sutton and Cheam (Paul Scully) for securing this important debate. I also pay tribute to the Minister, who I think is the longest-serving Minister with this brief, so it is great to see him here. He has done his job very well. The shadow Minister, my hon. Friend the Member for Hornsey and Wood Green (Catherine West), has really taken Burma to her heart and turned up at all the relevant debates.

The recent trip to Burma by the hon. Member for Sutton and Cheam must have been incredibly emotional. He went with Ben Rogers from Christian Solidarity Worldwide; anyone who has read Ben’s book would be astounded at how he has managed to slip into and out of Burma for so long. At least now, under a new democracy, he is able to travel freely. His book is almost like a James Bond novel.

The Inter-Parliamentary Union held a very important meeting with a top-level group of former Ministers. I am sorry that I could not be a member of the UK delegation, which was led by the former Member for Sheffield Heeley, my hon. Friend the Member for Penistone and Stocksbridge (Angela Smith) and the hon. Members for Enfield, Southgate (Mr Burrowes) and for Norwich North (Chloe Smith.

There are lots of phrases we can use to describe the situation there, but Burma is on the edge of a new era. For the first time in more than 50 years, a civilian President has been elected, and Daw Suu is now in the Burmese Cabinet. Think back and reflect on her incredible journey. She returned to Burma to look after her mother. Both her parents are now dead. She was separated from her young children. She could not say goodbye to her husband when he was dying. Now, because of some petty little rule, she cannot take her place as President, but she is there in the Cabinet, serving her country.

Hers was an incredible journey. All of us sitting here in a democracy know we are lucky when we think of the terrible things she had to face. She was under house detention and in jail, and there were threats to her life, but she had the incredible courage to stand in front of the military—almost like standing in front of the tanks. We saw pictures beamed across the world of her confronting the military with no fear whatever—I am not sure I could have done that. She has been on an incredible journey and has now turned her country into an overwhelming democracy.

Nevertheless, the military still have that 25% of seats: it is like someone having two arms and two legs, but one arm tied behind their back. That is why the hon. Member for Sutton and Cheam is right that we need to support Burma, with human rights and the rule of law at the heart of its democracy, but at the same time allow it to make mistakes and to move on and form a democracy in its own way, making its own compromises. We must be careful of how we raise the issues and ensure that we are helping Burma, as we have done throughout. I was delighted when the Burmese Government’s first move was to establish an Ethnic Affairs Ministry; the President said that that will be one of the most important things at the heart of their Government.

There also needs to be a truth and reconciliation forum. Whether or not it is something that our Government could help with, and whether or not it is done under the auspices of the United Nations or the EU, it is very important to do it. Perhaps the elders have a role to play. It seemed to work in South Africa, and I think Burma needs something similar to move on. Perhaps members of such a forum could include the heads of, or representatives from, all the religions. The Rohingya have to be part of it; they have to be able to tell their story. Another major issue is that of internally displaced people. Whether they are Rohingya or other people, we have to help them to go back to their villages. Many of them are still living in poverty. The non-governmental organisations have to have an opportunity to provide humanitarian aid to all those internally displaced people.

There has been a long-standing debate, with the Burma Campaign UK raising issues that sometimes many of us who are elected find difficult to raise. Its current campaign, to which I am a signatory—I encourage all Members to become signatories—is called “Standing with the women of Burma to end rape and sexual violence”. Some 110 high-profile women have already signed up to it, and it would be nice to see more signatories.

The hon. Member for Sutton and Cheam mentioned the atrocity involving the two Baptist teachers in Kachin state. What of the grandmother, Ngwa Mi, who was sheltering in a church? They beat her and gang-raped her. She is now back in her village, but is understandably mentally unstable. How can someone ever deal with something like that? Will the Minister ensure that the UK Government direct their assistance to those women and give them help and support to rehabilitate them? They are survivors, and they are very strong. The former Foreign Secretary, William Hague, was very active on Burma. A Burmese delegation came in 2014 and we met them at a brilliant round-table event set up by the Foreign and Commonwealth Office. It would be nice for some of that effort and initiative to be directed to help those women.

We have an important role to play as part of the international community. We cannot stand by and see atrocities happen; we cannot stand by and see the rule of law broken or human rights abused. This is a global issue. Wherever we see injustice, we have to raise it. International pressure is important. Rather than try to influence particular pieces of Burma’s legislation, will the Minister make representations that the 2008 constitution in Burma be amended so that the guarantee of impunity for military perpetrators is removed? We also have to keep up the international pressure to remove the rule that somebody cannot become President if they have children who were born outside the country.

The hon. Member for Congleton (Fiona Bruce) and I were part of a Speaker’s delegation to that country, and we met some very brave women. I hope the Minister will make representations to ensure that women become an equal part of life in Burma. Whether it is in politics or through NGOs, their voices must be heard. The hon. Lady will remember the lovely children we saw going to school—that is where they should be—wearing backpacks with the United Nations logo stamped on the back. Hopefully, in years to come, we will ensure that they end up in school without needing that logo. We want those children to grow up not knowing hatred or judging people on the basis of their religion. They must have mercy and compassion for each other and use their talents for a new Burma.

Pope Francis has declared to all Christians that this year is an extraordinary jubilee of mercy. How fitting it would be for Burma to become the embodiment of equality, justice and peace.