HomeNewsValerie speaks in debate on planning

Valerie speaks in debate on planning 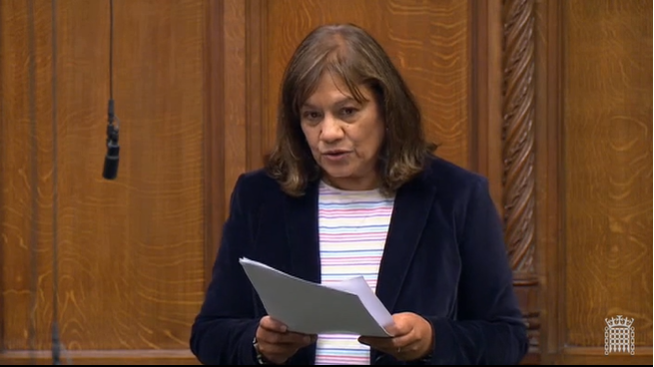 “I welcome this motion following the publication of the report by the Housing Communities and Local Government (HCLG) Select Committee.

Mr Speaker kindly granted me an adjournment debate on this topic which is a foretaste of what my constituents have had to put up with – and what the future holds if the Government proceeds with this white paper. It is  as yet an unpublished bill.

I want to thank my Hon Friends on the HCLG committee for their timely and unanimous report and the diligence in which they undertook a subject for which there was a White Paper but, as they said in the report, not much detail other than 3 zones with an emphasis on housing.

This is not how to put the planning system right; to have in the Government’s words “radical and necessary reforms”.

The Government’s hopeless response is to exclude the public even more from the process instead of improving the processes now.

This is a developers’ charter which is becoming the people’s nightmare.

But the HCLG Report had an interesting statistic:

At page 111 of the Report, 63% said they not satisfied with their experience with the system and at Page 112, 61% of respondents said they did not feel the planning process was fair.

The Minister will have heard the story of Narrow Lane at the Adjournment debate.

The Site Allocation Document (SAD) is a document of how land will be used in Walsall. There was extensive consultation and it was approved by a Planning Inspector in 2019, including identified sites that can be developed and a site for Gypsy, Roma & Travellers (GRT).

Without any notice,  without any consultation, the Cabinet of Walsall Council decided that Narrow Lane out of the blue -would be designated as the transit site.

It is on a junction with poor air quality and where there are accidents. The decision was made without impact assessments or local involvement.

2 weeks ago, an elderly person was knocked over and there are still damaged railings. But the Cabinet agreed it and did not even look at the Site Allocation Document or refer to it in background papers when they made their decision.

All the ruling Tory party decided not to support the motion to ask the Cabinet to reverse its decision. The Leader of the Council has erroneously suggested there would be a consultation at the planning application but there cannot be, not on the Site selection.

That is exactly what will happen under the Government’s proposals. They will say they had a consultation on the local plan and then there will be no further involvement with our constituents and then Cllrs or the Secretary  of State will be free to decide the way they want to without local involvement. The legal advice I received on the transit Site said the Cabinet’s decision was flawed because “they failed to take steps to properly inform itself, considered irrelevant considerations, and there was bias.”

People will say what about a judicial review, but the Government  is also making changes to Judicial review. My constituent was told by the Legal Aid Board that he had a good claim on the merits, but because other people would benefit his claim was denied – it seems to me that would be a good reason in the public interest, however they would not grant legal aid on that basis.

My constituent qualified on a legal basis, he had no other means and should have been granted legal aid. He lives directly opposite the site. Is he supposed to do go round with a hat to ask everyone to make a contribution?

My constituent’s basic rights and arguments to be tested in a Court have been stopped.

So here is the warning: the decision maker can depart from the local plan and our constituents will remain helpless under these hopeless proposals.

The Government say that it is Housing that is driving this reform. But there are over 1 million homes that have approval but have not been built.

There was no mention of climate change and some homes are still built on the flood plain.

I asked the Minister why he does not mandate that every new build should have solar panels on the roof if he is serious about making changes.

Turning to transparency and conflicts of interest, in our case the transit site was agreed in the SAD to be placed on a site that was environmentally suitable, near to a settled community with everything nearby to integrate the community which happened to be in Walsall North the constituency of the Housing Minister who used to be a Councillor on Walsall Council. The portfolio holder also used to work for the Housing Minister, but now works for the Conservative party and registered his interest only days after the scrutiny committee meeting.

The legal advice we received said there was bias, just as we saw that the approval of 1bn Westferry Printworks property development in Tower Hamlets approved by the Secretary of State after the issue was raised at a Tory Party fundraising dinner – only for the Secretary of State to admit that “it was unlawful by reason of apparent bias” (Source: Court Consent Order).

I asked the Minister to investigate the decision-making process of the first decision made by Walsall Council Cabinet to select Narrow Lane.

And in the interests of transparency I asked if the Minister wants improvements he needs to ensure and mandate every planning decision at committee is a compulsory recorded vote. It is a simple and common sense thing to do which will increase transparency and accountability.

Brighton and Hove, Wirral, Reading Council and now Sheffield Council  have move away from a Cabinet structure and to a Committee structure  which will make it more transparent and with local councillors involved.

In conclusion, there needs to be more consultation not less and of engagement with all civic society, historic associations, Friends of the Earth, Campaign for the Protection of Rural England and the Canal and River Trust.

The Town and Country Planning Association said: “all these reforms have a common theme of removing local voices from the process”.

And the Royal institute of British Architects also against these proposals said the Government has missed a huge opportunity to make changes to the planning system for the better.

Buildings and places do not exist without people who breathe life into them as we all know from the pandemic.

I urged the Minister to listen to local people, give them back the control and end the people’s nightmare.”