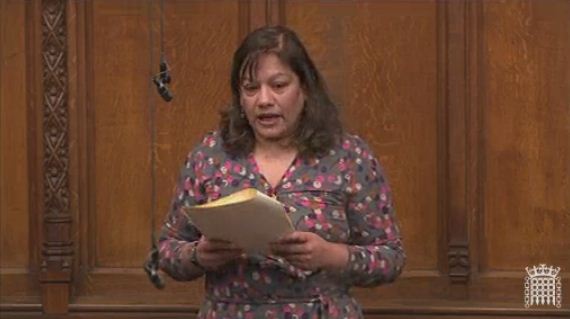 On Thursday 17 January 2013, Valerie spoke in a Backbench Business debate in the House of Commons on problems with ATOS Work Capability Assessments.

“I did ask a written question ‘how many people in Walsall South have been declared not fit to work’. In a written reply, the response was ‘please note that constituency level information on the Work Capability Assessment process is not available’. So it is no wonder that the Government has no idea why my constituents are suffering.”

“Let me tell the Government, and the Minister who is here, what my constituents face. SD has cancer and is undergoing radiotherapy. She has been declared fit for work. SH suffered seven strokes and suffers from Type 2 Diabetes and a liver condition. She has had to appeal her decision. KH was placed in a work related group. She has incontinence of the bowel and bladder, diabetes and is partially sighted. CS has received 0 points despite having a prolapsed disc. SA suffered a stroke and is blind but he has still been declared fit for work. LM has arthritis of the spine and has had to appeal his decision.”

“Stephen Nye was so angry that he felt he came to see me on behalf of his father. He said ‘I want to let you know what is going on’. He said this: ‘sick people are being persecuted, the assessment system is flawed and they are harassed by the Job Centre’.”

“MD came to see me with her husband who is blind and deaf. They said the work capability assessment does not take into account issues faced by blind and partially sighted people. I wrote to the current Minister’s predecessor who said that ‘Professor Harrington has had considerable engagement with RNIB, Sense and Action for Hearing Loss’. But that is only at his third review. This should have been put in place before the assessments were even devised. Only at his second review did he suggest that sensory descriptors, and an additional descriptor which assess the impact of generalised pain and or fatigue, should be put in place.”

“I am really pleased that the GPs at their annual conference called for this computer based Work Capability Assessment to be scrapped. They should know: they make medical assessments every day. They see the sick and the vulnerable every day.”

The Hansard transcript of Valerie’s speech can be read here.