HomeNewsValerie Speaks in the One Billion Rising Debate.

Valerie Speaks in the One Billion Rising Debate. 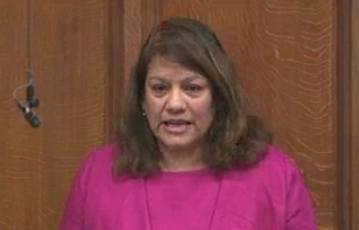 On Thursday 14 February 2013, Valerie spoke in a Backbench Business debate in the House of Commons on protecting future generations from violence against women and girls.
Valerie said:
“One Billion Rising is a worldwide event. In London, we debated violence against women and girls, but people responded to this call from the shores of Brazil, from Australia with the Girlpower Goddess and White Ribbon event, and from India, where there was a flash mob in Parliament square and the song, “Jago Delhi Jago”—Rise Delhi, Rise. We know that two months’ ago in Delhi, five men were accused of the rape and murder of a 23-year-old medical student who did nothing but sit on a bus. People in Delhi have risen up, and we are saying ‘yes’ to end violence against women.”
“There are still practices that victimize women and treat us as second class. Those who stand up for No More Page 3 say that women do not want to be objects in a newspaper. We want to end the practice of the badly named ‘honour’ killings. We want to put an end to the dowry system where the payment of a sum effectively buys a girl for marriage. We need to end the terrible practice of female genital mutilation, which has no basis in culture or religion. Eighty percent of people who are trafficked are women, this is modern day slavery. Throughout the world, rape is used as a weapon of war.”
“The debate was not about women and girls as victims, but about empowerment. Malala Yousef stood up and was almost killed because she wanted every girl to go to school. Parliament has celebrated Aung San Suu Kyi, who must daily stand up to those who try to take away human rights and progress made by democracy. We must highlight and support those women. We must recognise and celebrate their courage.”
Further information on One Billion Rising can be found here: www.onebillionrising.org
The Hansard transcript of Valerie’s speech can be read here: http://www.publications.parliament.uk/pa/cm201213/cmhansrd/cm130214/debtext/130214-0002.htm#13021465001477
Further coverage of Valerie’s speech in the debate is available on the ITV website: http://www.itv.com/news/central/2013-02-14/debate-over-how-to-reduce-sexual-violence/