The Employment and Trade Unions Rights (Dismissal and Re-engagement Bill) was debated on sitting Friday on Friday 22 October 2021 and I attended to support Barry Gardiner MP’s Bill. The Bill would discourage companies firing staff and re-hiring them on worse pay. Fire and Rehire has been used as a negotiation tactic which in reality erodes workers’ rights whilst slashing pay and keeping wages low to increase value for shareholders.

I voted in favour of the Bill, which was introduced to its second reading. Barry Gardiner said in his opening remarks:

“This Bill is about making Britain the best place to work. It is about levelling up and treating people fairly. It is about better regulation to govern fire and rehire. I am grateful to hon. Members on both sides of the House. I know that Fridays are an important time for us all to be with our constituents. That so many Members have chosen to be here …. I believe it is because Members of all parties recognise that the practice of fire and rehire is creating hardship and real distress for hundreds of thousands of families across Britain. We can end that misery, and we must.”

Sadly the Bill was defeated:  Noes: 251 and Ayes: 188. The debate is to be resumed on Friday 10 December 2021. It is a pity the Government did not support the Bill that would stop large companies from making working life so uncertain and insecure.

You can read the debate in full here. 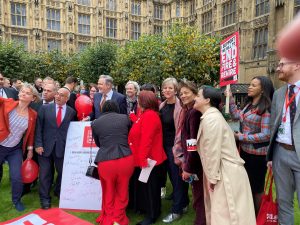