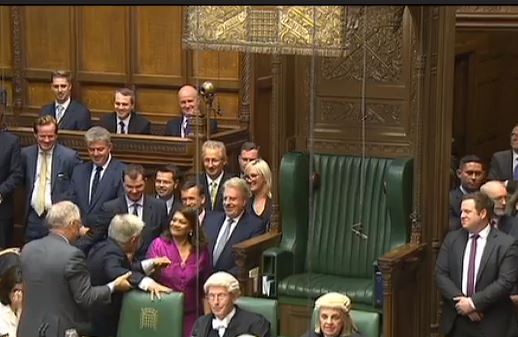 It was a great honour to “drag” the newly elected Speaker Mr John Bercow MP to the Speaker’s Chair after he was re-elected unopposed on Monday 18 May 2015 the day the Commons returned after the General Election.

The tradition has its origins in the duty of a Speaker to communicate the views of the Commons to the monarch of the day. That could put the Speaker in personal danger if the monarch didn’t like the message so in former times MPs might need to be persuaded to take the Chair.

Mr Speaker Bercow has been a strong voice for the modernisation of the way Parliament operates and has stood up for Backbench MPs to hold the Government to account.

One key means for them to do that is for the Speaker to grant an Urgent Question where a Minister is asked to come to the House of Commons to answer a question from an MP on a current issue of major concern.

In January 2013 I was granted an Urgent Question on attacks by the Burmese army on civilians in Kachin state. You can find that at