Valerie speaks in Adjournment Debate on Planning in Walsall South 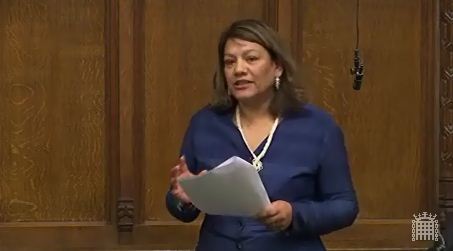 On Tuesday 20th December 2011, Valerie took part in a pre-recess Adjournment Debate in the House of Commons on Planning in Walsall South and the National Planning Policy Framework. Following the debate, Valerie presented a petition of 263 signatures to Parliament regarding the development at 1 Woodside Close.
During the debate, Valerie said:
“I want to raise planning issues that have upset my constituents, because I do not like to see my constituents upset.”
“I hear stories in my surgery of intimidation, threats and broken windows, all because some people oppose an application. In my constituency, the green belt is already under threat. For example, officers said that the proposal for the Three Crowns inn site would involve unacceptable development in the green belt and there were no special circumstances to outweigh that. However, the planning committee let it go through, so three detached houses have been built on the green belt. That is a great cause for concern. My constituents told me that a substantial amount of time was taken up by speakers in favour of the development, but that they were allowed only three minutes.”
“That brings me to the long-suffering folk who live around 1 Woodside close. All previous applications have been refused by the inspector on the basis that development would have an adverse impact on the character of the local area. My poor constituents have had to put up with six applications of a similar nature. Of the last two applications, one for the construction of 13 flats was dismissed on 28 October 2010 and one for the construction of 14 flats was dismissed on 20 August 2011. Still the applicant persists without any response from the council. Clearly, the Planning and Compulsory Purchase Act 2004 needs to be revisited by the council. The residents in Cottage Farm residents association feel that their views have not been taken into account. I will present a petition to the House at the end of the debate this evening on behalf of those residents. I admire their resilience and stamina.”
“The National Planning Policy Framework (NPPF) will weaken the test that is applied to town centres. Under the sequential test, developers have to show that there is no suitable alternative site in the centre, but that does not apply to offices. The NPPF will relax brownfield targets; relax the requirement to plan for the efficient and effective use of land; reduce the protection of the green belt; remove the direction to direct offices to the town centre; and reduce sustainable economic development. The combination of those things will push development away from where it is most needed.”
“Walsall has a history of protecting employment land and has a sustainable settlement pattern. Manufacturers who are experiencing growth have not asked me to raise planning issues; they have asked for money for apprentices so that they can train them and fill the skills gap. This is not about housing either, because the Home Builders Federation holds more than 280,000 units with planning permission that are ready for development. Planning permissions do not deliver new homes. The problem of there being not enough homes is more to do with the stagnant property market, banks not lending and the boom in overseas investors investing in housing, not affordable housing.”
“Once land has been sold and developed, it is lost forever. That is our heritage. That is what we leave to the next generation.”
Speaking after the debate, Valerie said:
“I presented a petition of 263 signatures to Parliament regarding the repeat planning applications for the construction of flats at 1 Woodside Close. A Minister from the Department for Communities and Local Government and the relevant Select Committee will have to respond to residents’ concerns.”