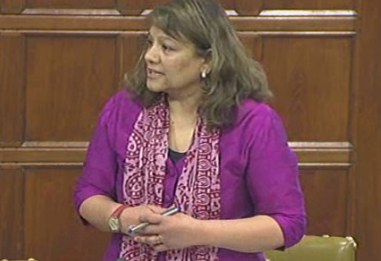 On Wednesday 12 June 2013, Valerie spoke in the Westminster Hall debate on Human Rights in the Rakhine and Kachine States in Burma.

Speaking in the Debate Valerie said:

“My contribution will focus on three main issues: the Kachin state, land grab and humanitarian issues. Kachin is predominantly a Christian state. Some 100,000 people have been displaced in Kachin. Although a ceasefire has been announced, it appeared to be on the very day that General Thein was in America. Christian Solidarity Worldwide reports that abuses are still taking place, even after the ceasefire.”

“The second issue is land grab. People who have been living on the land and using it to feed themselves have been displaced. The Asian Legal Resource Centre, in a submission to the United Nations Human Rights Council in June, warned that Burma is in danger of a land-grabbing epidemic. Forests have been cleared, dams and pipelines are being built and the people are just being ignored. The Burmese Parliament has a land investigation committee, but it has seen only about 500 complaints, and many ethnic minorities do not even know that it exists.”

“Thirdly, on the humanitarian aspects, women are being trafficked into China and back again. They cannot do anything with their lives once they have been humiliated in that way. Attacks are consistently systematic. The reports are clear, and they all say the same things: people are being threatened. Local aid groups say that workers are also being threatened by local administrations. A child died after drinking from a stream poisoned by pesticides.”

“In the long term, a constitutional solution is needed. We must use our resources and expertise to ensure that the NLD’s aim of equality of nationalities is supported. Religion must not be used to divide people; people must be allowed to live and choose their own religion, whatever it happens to be. We have a long history with Burma, and we should be able to walk hand in hand as Burma finds a new constitutional settlement that respects human rights and the rule of law. As one worker said, we need to move away from the ceasefire process to a peace process. We can help Burma step out from behind the faded politics of the past. That can be achieved only through dialogue, respect for each group and the rule of law and, most importantly, reconciliation.”

Valerie’s speech can be viewed in the Official Report here.