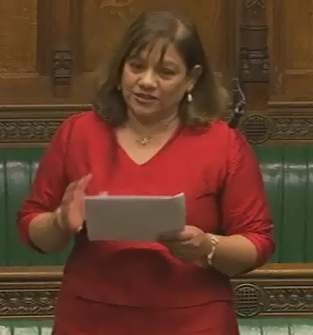 “In my view, science generally and women in science—are under threat. The Biochemical Society has conducted a survey in which women scientists expressed a number of concerns. Those women scientists cited inflexible funding structures, which mean that women are unable to take time out, perhaps to look after children, without being left behind.

“The UK Resource Centre for Women (UKRC) has identified that 5.3% of all working women—or one in 20—are employed in a SET occupation, compared with one in three men. Nearly 100,000 female STEM graduates are either unemployed or economically inactive.

Valerie Vaz MP drew the Minister’s attention to  the concerns of many organisations including the UKRC, the Campaign for Science and Engineering (CaSE), the Biochemical Society and the Institution of Mechanical Engineering.

“I urge the Minister to think again about cutting the grant and changing the nature of the work conducted by the UKRC, and to work with the UKRC alongside any other initiatives that the Government want to set up.

“I asked the Minister to look at some of the solutions put forward by women scientists responding to the Biochemical Society. Those solutions include establishing funding streams that are not conditional on an academic publication record and providing funding or fellowships for part-time positions, to encourage women to have flexible working arrangements.

“I also asked for clear targets, which is the main way of measuring improvements in achieving equality.” Other countries such as Germany are investing in Science.

You can read Valerie’s full speech and  the debate by clicking  here.