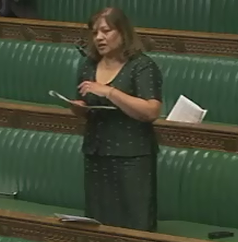 “The Cabinet Office has announced plans to reform the civil service. This will result in the number of civil servants shrinking from around 500,000 to around 380,000 by 2015. It will also involve more outsourcing of policy development through a central fund.

“I asked the Minister how much will be in the central fund and whether it will come from separate Departments. I also asked if he will be using a tendering process, or if he will just appoint one particular person.

“The Minister confirmed that the Cabinet Office would provide a £500,000 fund which would be matched by other Departments if they want to bid to use it. However, he was not clear about how policy development will be commissioned.

“The Government should ensure that this is clarified so that there are clear rules about what public money is used for.”

You can read Valerie’s question and the Minister’s response here.