HomeNewsYouth Parliament comes to the House of Commons

Youth Parliament comes to the House of Commons 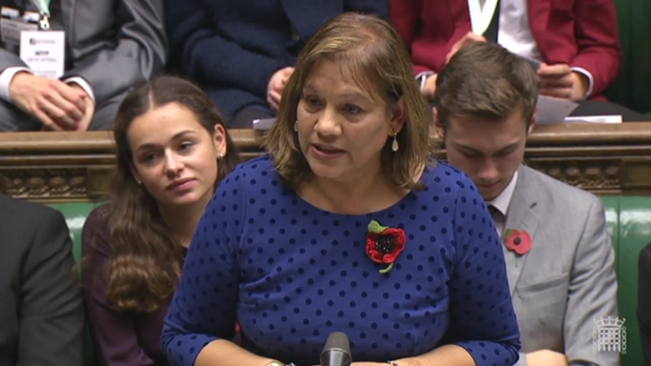 As Shadow Leader of the House it was a delight to welcome the Youth Parliament to the House of Commons for their 7th visit on Friday 11 November 2016. Young people aged 11-18 filled the Chamber and debated topics chosen through their Make your Mark ballot. Nearly one million young people had voted on topics to debate such as “Votes for 16 and 17 year olds” and “tackling racism and religious discrimination”.

The MYPs debated a Better Kinder democracy – concerned about the intolerance that appeared to flow from the EU referendum vote. Debate was passionate and of a high quality. The result of the MYPs vote was that next year they will campaign on ‘Votes for over 16s’ and ‘a Curriculum to prepare us for Life’.

Young elected representatives from across the UK are committing their time to take part in democracy. I encouraged them to continue to lobby for the issues they debated and affirmed MPs would work hard to make our country worthy of them all.

“Did you enjoy yourselves today? [MYPS: “Yes.”] Great, because you are now going to join me in thanking the British Youth Council, everyone on the parliamentary estate, the Doorkeepers—they call them that, but they are much more—those involved in Parliament Week, your families, and Mr Speaker for chairing the debate. [Applause.] Hon. Members, you are showing us the way. Your decision to add extra time to debate a kinder, better democracy has never been more important, not only after 23 June but after what has been happening in America—we have not even had the chance to debate that in Parliament, and we will follow you. Jack, you showed us how important it is to move people with disabilities to the front of the agenda. You have made a difference as a member of the NHS Youth Forum.

Hon. Members, you are showing us the way to an inclusive society. As the Minister said, 2 million young people have taken part in your ballot over the past few years. This year, 978,126 young people voted on the topics that you have discussed today. Connor Hill from Dudley returned the most ballots, 8,722. Caitlin Cavanagh from Liverpool returned 7,222. Samantha-Rose Beacham from Derbyshire collected 6,563. As Liberty, aged 13, said, we need to hear what young people are saying. Hon. Members, you are showing us the way because, during your debates, you have focused on the issues. You did not focus on personalities and you did not denigrate anyone.You have shown commitment, discipline, strength and even wisdom, remembering junior doctors and nurses who look after us when we are at our most vulnerable or the mum who has to work two jobs. You have shown us that you are ambitious for your constituents. Despite all your other responsibilities, you have put yourselves up for election and you have come here. You have worked really hard on all your speeches. You have given up your time for public service, so even if you did not speak—I am sorry, Rory Fittes, because I know you tried very hard—the fact that you are sitting here in Parliament is important. There will be other opportunities to show your talents. As the Minister said, some of you will be sitting here on the green benches.

We need to agitate—sorry, debate—if we want to make any changes, because I can tell you that I would not be standing here today if it was not for women agitating. Women were not allowed on the Floor of the House. We were up there, behind a grill, and it is only because women chained themselves to that grill, which is now in Central Lobby, that I am able to stand here as a Member of Parliament.[Applause.] Here is the punchline. If Donald Trump, as the President-elect, had anything to do with it, I would be behind a wall, let alone a grill. [Applause.]

When you go back down through Westminster Hall, look back at the entrance to St Stephen’s chapel and you will see the most beautiful work of art—launched by Mr Speaker—by Mary Branson, who is our artist in residence. The work consists of 168 glass discs that light up as the tide rises and falls. The discs represent the 168 pieces of legislation passed by Parliament that have
made a difference to equality. That is what I want you to do: to remember the fight for justice and for equal rights for everyone, irrespective of race, gender or disability. That is why what you have done today is so important. You have challenged prejudice and discrimination, and you have persuaded us that our public services need to be better. Muzdalfa, yes, we have to respect each other.

It is not about what is on your head; it is about what is in your head. Stephanie, your painwas palpable. Probably all of us either know someone or is someone who has been through what Stephanie has been through. If you think you are going to have fun, that you are going to go home now and collect your goody bag, your work is not done. Each one of you Members of the Youth Parliament has to report back to your constituents. Take those topics and lobby your MPs. Lobby the Minister, who seems to have a lot of money, and he can tomorrow pass legislation for votes for people aged 16 and 17—there you are, you heard it here. If you want a curriculum to prepare you for life, lobby your school, your headteacher and your school council. Set up lunchtime and after-school clubs. Go to other schools and tell them what you have done here today, and what you did in your year as a Member of the Youth Parliament, because now you are now the mentors. Young people will come to you to ask how they can become a Member of the Youth Parliament, and how they can run for it and end up in this Chamber. Use your incredible gifts and talents that I have seen in abundance today to help other people and give something back.

Mr Speaker, Minister and Alistair Burt, I am sure you were inspired today. We will go away and work hard to make this country worthy of you all.”