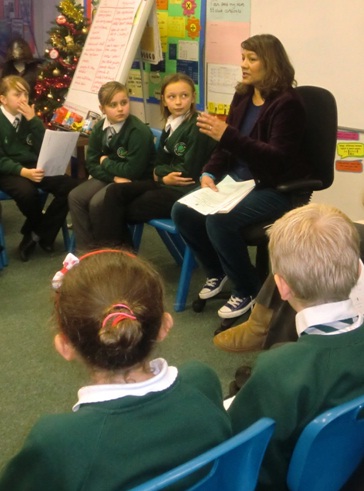 On Friday 14 December 2012, Valerie visited Bentley West Primary School to talk about Parliament Week and her work in the House of Commons.

“I suggested that Year 6 debate on a motion relating to the provision of free school milk. The room was arranged as we are in the House of Commons with the Government on one side and the Opposition on the other. I acted as the Speaker.”

“Some of the pupils spoke for the motion whist others spoke against it. Pupils on both sides made some very intelligent comments. I was impressed that the children were better behaved during the debate than the Chamber usually is at Prime Minister’s Questions. At the end the pupils voted on the motion by walking through the ‘Aye’ and ‘No’ lobbies just as we do in the House of Commons. The motion calling for the reintroduction of school milk was carried by 27 votes to 23.”

“Before the debate, I showed the pupils a copy of a House of Commons Hansard transcript and a copy of an Early Day Motion. I also answered questions from the pupils about my work in Parliament and explained to them that Members have to be very careful about what we say in Parliament.”

“It is important that children learn about Parliament, politics and democracy from a young age and understand that through our democratic institutions they will have a voice to make a difference in the world. A lack of awareness of the options that are open to people often leads to frustration and apathy. Bentley West Primary School is aware of the democratic process and is working to teach its pupils about democracy. I would like to thank Bentley West Primary School for inviting me to speak with the Children.”