On Friday 26 November 2021 I visited the Joseph Leckie Academy and met the new head James Ludlow. The new building looked amazing. The original funds which were allocated 2010 under the Building Schools for the Future fund was withdrawn by the incoming Coalition Government. This was very disappointing for the children and the staff who worked in a sometimes dangerous building. I met with Ministers and the then head Keith Whittlestone also attended meetings at the Department for Education. Sadly Keith died in April this year before he could see the building completed. In 2016 the then Schools Minister Nick Gibb described the buildings as grim. However with his support the bid for the Condition Improvement Fund enabled some but all all the work to be undertaken. I was surprised during my visit that the dining room and the hall , which I thought was included, was outside the scope of that tranch of funding.

James was able to share the latest Ofsted report published in October 2021 which awarded a ‘Good’ rating from Ofsted in all categories. This is a fantastic achievement for all the Staff and pupils and is a testament to the regime James Ludlow has initiated in the School. Congratulations to all at Joseph Leckie . They are now 3rd in the Borough for results. You can read the report in full here.

Later, I was asked by the Assistant Principal Mr Greaves to speak with his Politics students. Their questions and the discussion we had were thoughtful and insightful and I know some will go on to become active in Politics.  I wish them well. 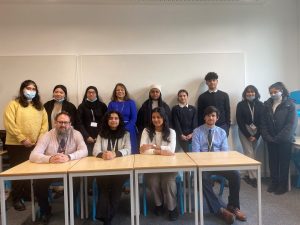