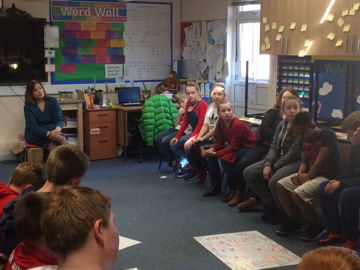 It was a pleasure to meet with pupils and staff at Moorcroft Wood Primary School on Friday 24 March 2017. I wanted to show Year 6 how we debated in the Chamber. So they prepared a topic and the class divided into For the motion and Against. The motion was that there should be no more zoos. The proposer started the debate and then everyone stood as ewe do in Parliament to “catch my eye”. I acted as the Speaker and moderated the debate.

It was a very good debate and the pupils had prepared their points which they put across very well. In fact one pupil was persuaded to change sides. The Tellers counted the votes and the motion was tied 15 -15. Year 6 were going to have a deferred division whereby in a secret ballot they would vote again to see if there was any change.

Moorcroft Wood Primary School has a Good Ofsted rating. The inspirational leadership of the headteacher and effective support by the senior leadership team along with their unremitting hard work have made this a good school where pupils are encouraged to have high aspirations. I was also told that they were in the top 3% Primary Schools.