An exciting opportunity awaits visitors to the New Art Gallery in Walsall. Jacob Epstein’s sculpture, Jacob and the Angel, is on display, having been loaned from the Tate with the support of Art Fund.

Jacob and the Angel depicts a biblical story (Genesis , Chapter 32, verses 24-32) where a stranger forces Jacob to wrestle him throughout the night. In the morning his opponent reveals himself to be an angel, and blesses Jacob for not giving up the fight.

In the sculpture, the angel, with wall-like wings, supports an exhausted, slumping Jacob. The two figures are wrapped in an embrace, emblematic of the embrace of God. It can be seen to act as a metaphor for the conflict happening across Europe at the time during the Second World War, and the struggle of Jewish people (the sculpture was created in 1940-41). 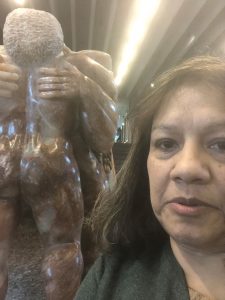 Epstein was Jewish, and often faced antisemitism, which prevented him from being accepted by the art establishment. The work can therefore also relate Epstein’s personal struggles to that the of his namesake, as well as that of the sculptor wrestling with the material, the act of carving directly from the stone.

The work was purchased by the Tate in 1996, and is on loan to the New Art Gallery Walsall until late September 2019. This is a wonderful opportunity to see a true masterpiece of sculpture.

The New Art Gallery Walsall has over 100 works by Epstein, donated by the Epstein and Garman families.