HomeNewsValerie supports guarantee 0.7% of national income to be spent on international development

Valerie supports guarantee 0.7% of national income to be spent on international development 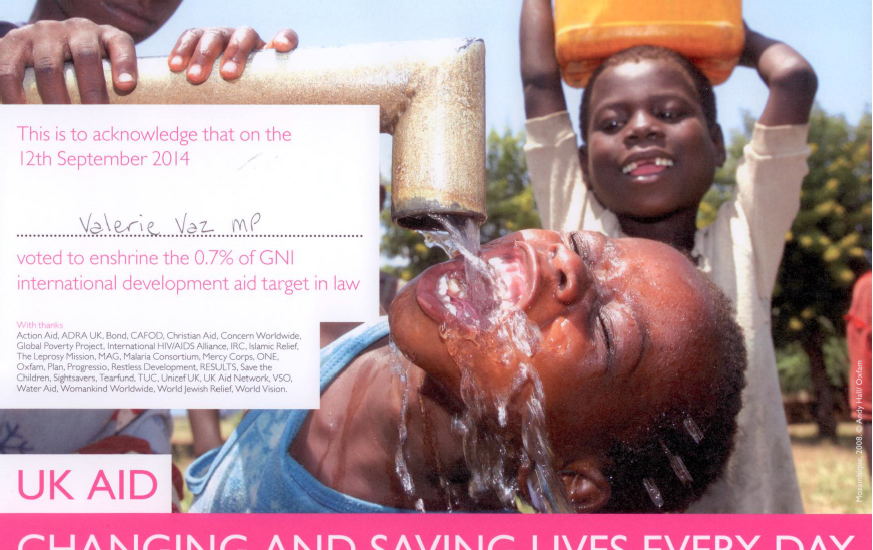 On Friday 12 September 2014 Valerie voted for the Second Reading of the International Development (Official Development Assistance Target) Bill 2014-15, which enshrines into law a commitment to spending 0.7% of national income on international development aid.

“Over the last two decades, UK aid has contributed significantly to improving lives in developing countries. During this time, the rate of poverty has halved and more than 9 in 10 children globally now receive a primary education. Between 1997 and 2010, the previous government’s aid spending contributed to lifting 3 million people out of poverty each year, as well as improving water and sanitation services for a further 1.5 million, and sending 40 million more children to school. This is an impact by the UK government on global development which we are striving to maintain for the future”

“I have seen for myself when I visited Burma last year the importance of the Department for International Development’s (DFID) programmes. DIFD has been a major humanitarian donor to Burma over the last 10 years. The development plans for the near future include vaccinating 100,000 children against measles, treating 230,000 people for malaria, and ensuring over 100,000 women receive health visits during pregnancy. Protecting aid spending will be essential to securing the benefits of these programmes. It also ensures that people can be supported while they remain in their country and not have to flee their country for economic or other reasons.”

“I am pleased that the vote passed the Second Reading, by 164 to 6”