HomeNewsValerie Votes to Save NHS from Privatisation

Valerie Votes to Save NHS from Privatisation 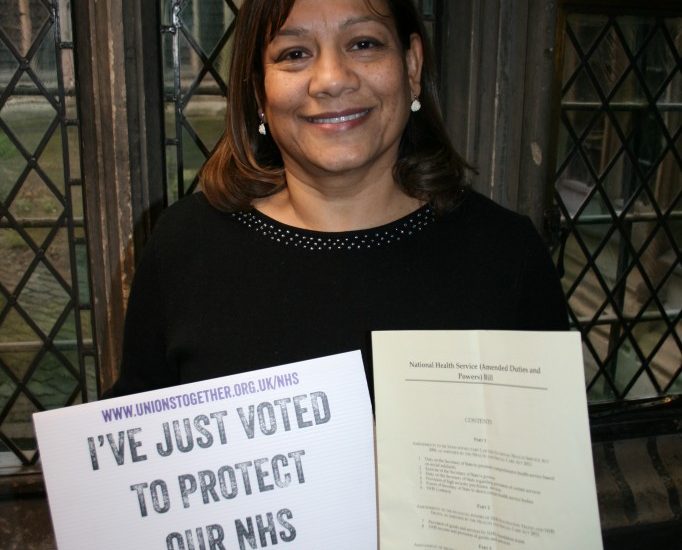 On Friday 21 November Valerie voted in favour of the Second Reading of the National Health Service (Amended Duties and Powers) Bill in the House of Commons. The Bill passed its Second Reading by 241 votes 18.
Valerie Vaz MP said:
“I voted in favour of Clive Efford MP’s Bill to save the NHS. The Bill set tough controls on privatisation and abolishes competition frameworks that were implemented in the Government’s Health and Social Care Act.”
“As a member of the Health Select Committee since 2010 I have seen from the start the process of the Health and Social Care Act and the concerns that surround it. We heard the evidence at all stages from the experts that the NHS would be open to competition and the Secretary of State was divesting himself of responsibility for the NHS. During the debate I asked what steps were taken to publish the risk register during the passage of the Health and Social Care Act as there was a concern that patient care would suffer during the £3 billion re-organisation of the NHS.”
“This Bill addresses the current lack of accountability from the Secretary of State on the running of the NHS by reintroducing the duty of the Secretary of State to provide a comprehensive health service. The Chief Executive of NHS England should not be announcing 5 year plans for the NHS on Radio 4, but instead it should be the Secretary of State announcing these plans to Parliament.”
“During the debate I raised the issue of conflicts of interests in the NHS. The Chief Executive of NHS England previously worked for United Health, an American private healthcare company. In November 2014 United Health were announced as one of the providers selected through pre-qualification to tender for the £1.2bn cancer services and end of life care contracts in Staffordshire. Local people and clinicians who have expressed opposition had not been consulted on this project.”
“The Health and Social Care Act requires health commissioners to tender any services that could be provided by private companies. £60m has been spent on tendering exercises. CCGs in Staffordshire have paid NHS support unit £250,000 to advise them on a new prime provider model to put cancer services out to tender. Two-thirds of commissioners have said that they have experienced increased competition costs. Public money is being wasted on this privatisation process when it should be used for more staff. This Bill eliminates market forces and the use of competition in the NHS.”
“Clause 14 of the Bill would ensure that the proposed Transatlantic Trade and Investment Partnership (TTIP) Treaty cannot impose procurement or competition obligations on the NHS.”
Further information on the National Health Service (Amended Duties and Powers) Bill can be found here: http://services.parliament.uk/bills/2014-15/nationalhealthserviceamendeddutiesandpowers.html