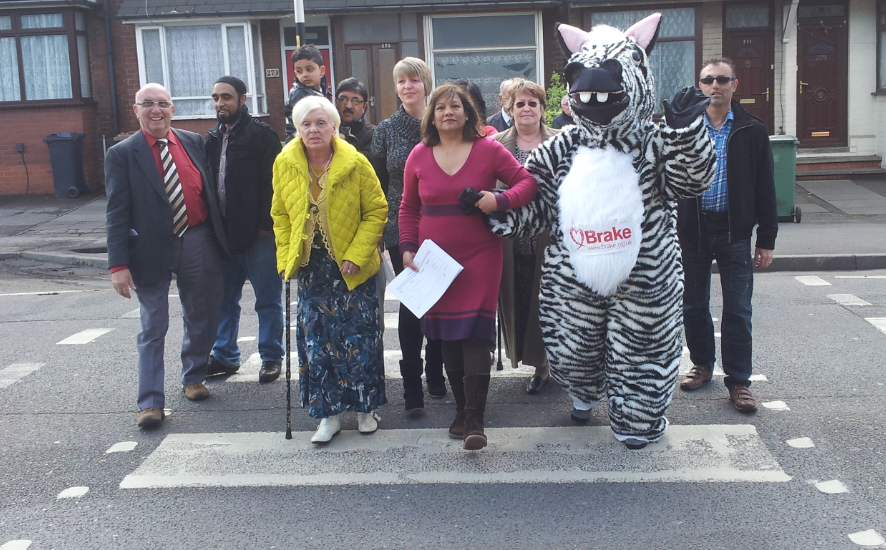 Zak the Zebra and Valerie have teamed up to call for a safer crossing on Darlaston Road in Pleck. Zak made an appearance with Valerie and local campaigners at the zebra crossing, near the junction with Hough Road, on Friday 20 April to call for a signal controlled crossing to be installed on the road. Valerie presented a petition of over 300 names to Parliament on Monday 23 April 2012.

“On 16 April 2012 I wrote to Walsall Borough Council to request that a signal controlled crossing is installed in place of the existing Zebra Crossing on Darlaston Road in Pleck. Residents have provided me with details of five incidents that took place on the crossing in five months between September 2011 and February 2012.

“When I requested that the crossing was upgraded in December 2011, Walsall Borough Council stated that this would cost around £30,000 and it would only consider upgrade works in locations where six serious incidents had taken place within six months.”

“Drivers tend to travel fairly quickly along this busy road and the large number of parked cars means that visibility can be limited both for drivers and pedestrians, particularly children. In one incident, on 8th September 2011 a four year old boy was hit by a car on the crossing and sustained serious head injuries. The driver of the car was recently sentenced to 10 months in prison for dangerous driving. A woman was also hit by a car on 25th November 2011. There are several schools nearby and the potential consequences of similar incidents are far too great for immediate action not to be taken.

“I presented a petition, signed by over 300 local residents, to Parliament. I hope that Walsall Borough Council will listen to the views of so many people and convert the existing Zebra Crossing into a signal controlled crossing.”

“It is outrageous that the council won’t act until more people have been seriously hurt on this crossing which has already claimed so many victims. Deaths and serious injuries on roads rips through families and devastates whole communities. Brake urges the council to listen to Valerie Vaz MP and local residents and take action now to prevent this community from suffering more casualties.”