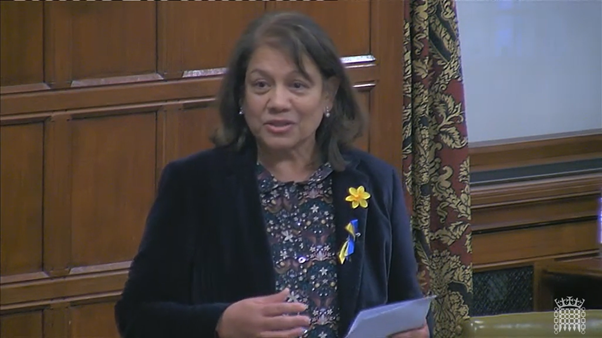 I spoke in a debate in Westminster Hall on Wednesday 3 March 2022 on funding for the Westminster Foundation for Democracy. The WFD is funded by the Foreign Office to work with parliaments, parties, electoral bodies and civil society in countries around the world, with the aim of supporting the development of inclusive and accountable democratic institutions.

My full speech is below.

“It is a pleasure to serve with you as Chair, Dr Huq. I start by paying tribute to my hon. Friend the Member for Gloucester (Richard Graham) for securing this debate, and thanking him for all the work that he has done for the wonderful Westminster Foundation for Democracy as chair.

If there was ever a time when an organisation was needed that crosses Parliaments, parties, electoral bodies and civil societies around the world—a non-departmental body working and empowering everyone—it is now. This debate is crucial because it reaffirms our commitment to democracy around the world. We have heard that every major index of democracy has pointed to a reversal in the spread of democracy—that is worrying—although there is an increase in political participation, which may be something to do with the work of WFD, hopefully, for more accountability.

It was a privilege to see the soft power of the FCDO when I visited Burma Myanmar in 2013, just before the elections. The soft power and the diplomats do not tell people how to vote or who to vote for; they just empower people. I saw the work that Parliament does to support the MPs in Myanmar—building a library and supporting the new MPs. What about the work that is being done now in Ukraine? WFD supported Ukraine’s independent budget committee, and they must be devastated for the people that they worked with to see them under siege at the moment.

Dr Huq, you will know what Gandhi said about democracy. When he was asked about western democracy, he said he thought it was a good idea. It is not about us exporting our version around the world; it is about empowering people.

Gandhi also said that when we educate women, we educate society, so I was pleased to see that the annual report of the Labour party WFD programme had focused on working women and young people. What a success! In Montenegro, 10 of the 24 participants in an academy were selected as candidates. Despite the pandemic, they delivered training sessions with more than 90 representatives from women and youth forums. People in the WFD are committed to the work, and it cannot take place without funding.

In this 30th year, I pay tribute to everyone who has worked for the WFD—including my colleagues who have done so, across parties—for making a difference to democracy. Its funding is uncertain. The organisation cannot plan and redundancies are already being made—a 29% cut, and with no plan or certainty of a budget for 2021-22. I was pleased to hear about the phone call but, as the hon. Member for Gloucester said, we hope to see that in writing soon. I urge the Minister to commit to funding immediately, because this is about the future, which we are seeing every day now on our screens.

The Government’s own integrated review stressed “robust democratic institutions”. I hope that the Minister will meet the chief executive of the WFD to settle on an appropriate level of funding to enable it to promote democracy and therefore peace. Minister, we only had to look at the face of the Ukrainian ambassador today in Parliament to see how important that work is. I note the Minister is dressed in the colours of the Ukrainian flag.

We are arming people with the arguments for democracy, for the rule of law and for the accountability and transparency of decisions made in the people’s name, so that they are not subjugated by authoritarian regimes. Surely that is the most compelling reason to make sure that the WFD can function, whether through widening participation of women and young people, election monitoring or—our most pressing issue—the future of the world on environmental democracy. The WFD is a sign to every autocratic Government that we will not be intimidated, but uphold the principles of freedom and justice, democracy and peace—and spread that message across the world.”

I was pleased that during the debate, the Minister confirmed the WFD’s funding would be increased by 25% to £6.5 million per annum over the next three years.