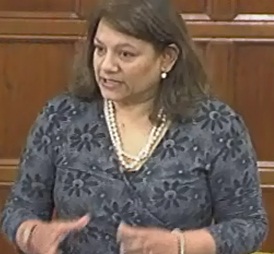 On Thursday 5 July 2012 Valerie raised the issue of equalising the rights of adoptive parents in a Westminister Hall Debate on Adoption initiated by Sheryl Murray MP for South East Cornwall and responded to by Tim Loughton MP, Parliamentary Under-Secretary of State for Children and Families.

” The issue of equalising rights of adoptive parents is important to ensure that people who want to adopt are treated equally.  Adoptive parents have been disadvantaged for too long by the lesser rights afforded to them in the time after they adopt.  The arrival of a new adoptive child in a home is a extremely significant event in a family’s life that is comparable to the birth of a child.”

Speaking during the debate, Valerie said:

“In the previous session, I introduced a Ten Minute Rule Bill entitled Adoption (Leave, Pay and Allowance Arrangements) Bill (HC Bill 212), which set out to equalise the employment rights of adoptive parents with those of birth parents. The Parliamentary Under-Secretary of State for Education Tim Loughton MP was helpful in meeting me to talk about different aspects of the Bill.”

“There are three areas where I would like to see adoptive parents treated in exactly the same way as birth parents.”

“I am pleased that the government is taking this issue seriously and is supporting adoptive parents through the implementation of adoption action plans.  This issue has generated cross party support and I hope that adoptive parents are valued for what they do, which is to provide a home for children in desperate need of a loving and nurturing family.”

You can read Valerie’s speech here.